In a veiled reference to Dhankhar, Mamata Banerjee had said that those holding constitutional posts have become BJP mouthpieces. 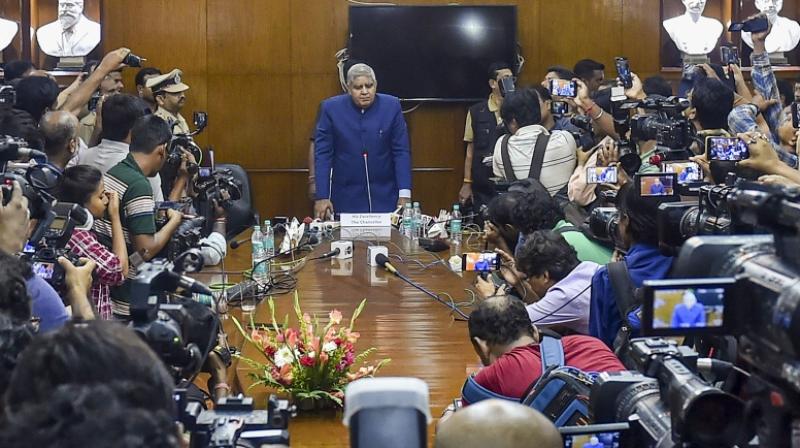 Kolkata: West Bengal Governor Jagdeep Dhankhar on Friday said some people are using their "tongue too often and very loosely" but that will not deter him from serving the people of the state.

In a veiled reference to Dhankhar, Chief Minister Mamata Banerjee had said that those holding constitutional posts have become BJP mouthpieces.

Declining to comment on Banerjee's jibe on Thursday accusing him of exceeding his brief and trying to run a parallel government, Dhankhar said there was no need to play every ball in the game of cricket.

"Some people are using their tongue too often and very loosely. There is no need to play every ball in the game of cricket. I would continue to serve the people of the state," Dhankhar said.

No one should make a comment without properly understanding his statements, the governor said.

His statements came a day after a fresh war of words erupted between the governor and the state government over distribution of relief for the devastation brought by cyclone 'Bulbul'.

Dhankhar had also slammed the state government for not responding to his request for a helicopter to travel 300 kilometres and said whenever he gets a communication from the chief minister, he responds within 24 hours.

The governor was on Thursday refused permission for a chopper to travel to Farakka in Murshidabad district, making it the second such instance in one week.

Dhankhar visited Farakka on Friday morning to attend a programme.

The request for the chopper was made well in advance but there was no response from the administration, a Raj Bhavan source said.

The ruling Trinamool Congress (TMC), however, questioned the need for a helicopter for the governor's travel and termed it 'absurd' and 'misuse of public money'.

Earlier this week, the governor had requested for a helicopter to travel to Shantipur in Nadia district to attend a festival, which was also turned down by the West Bengal government.