The Governor has asked Palanisamy to seek vote of confidence in 15 days, the Raj Bhawan said in a statement. 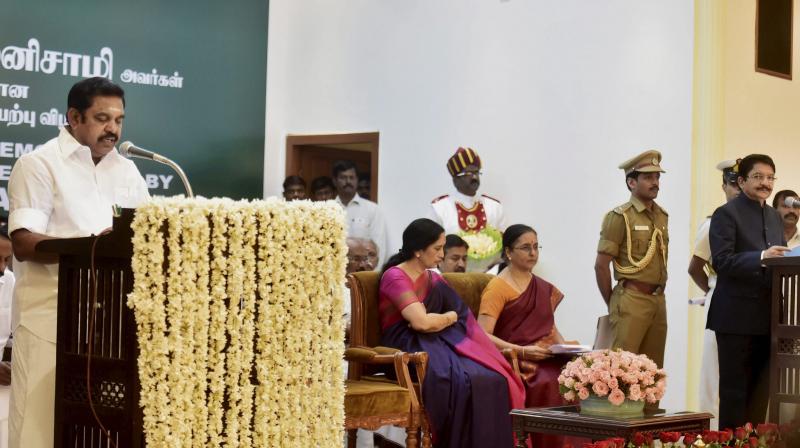 A total of 31 other All India Anna Dravida Munnetra Kazhagam (AIADMK) MLAs were also sworn in.

All India Anna Dravida Munnetra Kazhagam (AIADMK) leaders were at the Raj Bhavan to witness his oath ceremony.

The AIADMK workers and supporters earlier in the day distributed payassam (sweet dish) outside Golden Bay Resort, after Palanisamy was elected as Chief Minister.

The Governor has asked Palanisamy to seek vote of confidence in 15 days, the Raj Bhawan said in a statement.

The Governor heard competing pitches last night from within the ruling party of the state over who should be the Chief Minister.

The Governor first met with Palanisamy, who claimed to have the support of 125 legislators.

Next up was Panneerselvam, who claimed to have the support of 11 MLAs.

She also will not be able to contest elections for 10 years or hold public office.

The disproportionate assets case that posed a legal hurdle against Sasikala's taking over as the Chief Minister dates back to 1996.