Tussle terms: All the key words from a war

Jayalalithaa was hailed throughout her political life as Puratchi Thalaivi. Sasikala has already received one of her own titles. 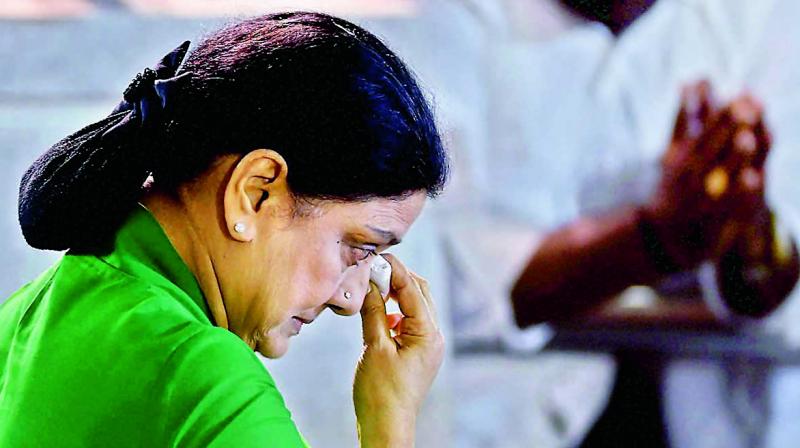 The events in Chennai have been responsible for most of the headlines this week. But here are certain terms you need to know the meaning of, to understand the news better.

‘The Mannargudi Mafia’
This is the collective name of Ms Sasikala & Company. The AIADMK General Secretary and a host of her relatives hail from Mannargudi in Tiruvarur district. Many of them were banished from Poes Garden by the former CM Jayalalithaa and now, all of them resurfaced — standing as sentinels to her body at the funeral on December 6, 2016 along with Sasikala’s estranged husband M. Natarajan, a former PRO to the government of Tamil Nadu.

‘Ilam Puratchi Thalaivi’
Jayalalithaa was hailed throughout her political life as Puratchi Thalaivi or revolutionary leader. Now, Sasikala, who seeks to follow in her path not only as General Secretary of the party but also chief minister, has been given the title of Ilam (young) revolutionary leader. At 60, she is not exactly young but Ilam, compared to her mentor Jaya who was 68 when she passed away. Now better known as Chinamma (Little Mother) to Jaya’s Amma, she will soon be known only by the short form of IPT.

‘Saraswati Moligal’
As the most loyal of Jaya and now Sasikala followers, C.R. Saraswati has shot to fame for defending the indefensible in all matters pertaining to AIADMK, of which she was made spokesperson of. English grammar may not be her longest suit, but she gets by nevertheless, screaming at opponents. Her solecisms go by the name of Sarawati Moligal now. But her logic in saying a woman’s (Jaya’s) place  must be taken by a woman (Sasi) was questioned.

‘Mallukattu’
Jallikattu may be the famous ancient sport over which the state kicked up such a shindig. It has lent its honorific now to mallukattu — or wrangling, which is what’s going on in Chennai.

‘Mirattal’
Threats have become somewhat common during the mallukattu season, much as injuries during jallikattu. While threats became a topic of debate after OPS’ Marina revolt, he also made one by Jaya’s residence ‘Veda Nilayam’. In a tit-for-tat threat, the ruling party’s Kalairajan said he would cut off both hands of the CM if he so much as tried to take over Jaya’s Poes Garden bungalow .