India   Politics  16 Apr 2019  'If ours allaince is Mahamilawat, what shall we call yours': Akhilesh asks BJP
India, Politics

'If ours allaince is Mahamilawat, what shall we call yours': Akhilesh asks BJP

He also questioned the BJP-led central government on job creation and farmers income. 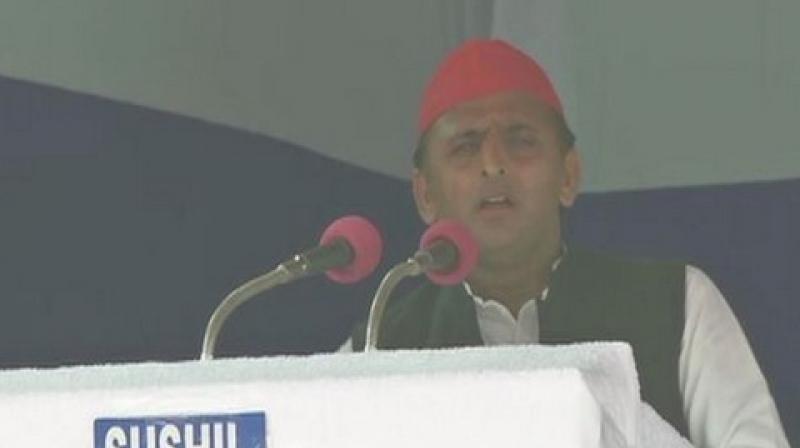 Akhilesh Yadav took a swipe at the Election Commission for handing over a 48-hour ban from poll campaigning to Bahujan Samaj Party supremo Mayawati. (Image: ANI)

Agra: Samajwadi Party president Akhilesh Yadav on Tuesday attacked Prime Minister Narendra Modi for repeatedly calling the SP-BSP-RLD alliance as 'Mahamilawat' and asked what name should be given to National Democratic Alliance which has over 38 parties.

"If our grand alliance of three parties is 'Mahamilawat', what name shall we give to your alliance which is a conglomeration of more than 38 parties in the country?" Akhilesh said at a rally jointly organised by the three parties.

Underscoring that the coming together of SP, BSP and RLD is an alliance of farmers and the poor, the former UP Chief Minister said, "Those who say this is a Mahamilawat, I tell them, this alliance unites the hearts of the people."

Akhilesh accused the BJP of spreading hatred and fear and asserted that the alliance will demolish the walls of hatred created by BJP.

"The BJP is spreading hatred on the same lines like British divided and ruled us. This alliance will demolish the walls of hatred," he said.

In a veiled reference to the Prime Minister's affiliations with the Rashtriya Swayamsevak Sangh, the SP president said: "The people who have taken two oaths (first to RSS ideologies and secondly as the Prime Minister) can never be the custodian of the Constitution."

He took a swipe at the Election Commission for handing over a 48-hour ban from poll campaigning to Bahujan Samaj Party supremo Mayawati. "No matter how many restrictions they impose, the alliance will leave the BJP far behind in the polls," he emphasised.

He also questioned the BJP-led central government on job creation and farmers income. "When we asked for jobs, he told us to go and fry pakoras," he quipped.

As Akhilesh continued his speech, party supporters raised slogans of 'chowkidar chor hai' (the watchman is a thief) in a reference to Prime Minister Narendra Modi.

"If you are aware of what you are chanting, shall I believe that his (Modi's) post will be taken back," Akhilesh asked the gathering amid the anti-Modi chants.

He accused the BJP of conspiring to take people's money away by banning the notes of Rs 500 and Rs 1000 denominations in 2016 and urged people to conduct a votebandi (No vote to BJP) to avenge their plights of demonetisation.

He alleged that demonetisation and Goods and Services Tax (GST) were introduced to benefit the rich.

He said: "Sometimes it looks like demonetisation and GST were not implemented for curbing corruption and black money; they were done to benefit one per cent people of the country. Data shows that he (Modi) was the Prime Minister of that just 1 per cent people."

Voting in Uttar Pradesh is taking place in seven phases from April 11 to May 19. Counting of votes will be held on May 23.