I have the Independents too: BSY

Speaking to the media later, Mr. Yeddyurappa came down heavily on the Congress for its attempts to form the government with the help of the JD(S). 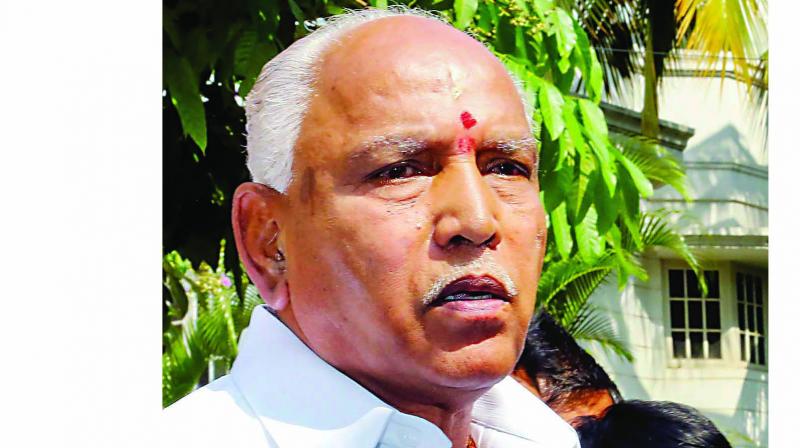 Bengaluru: At the end of a day of ups and downs as the trends  emerged with each round of counting, the BJP’s score in the May 12 assembly poll finally settled at 104 seats on Tuesday,  nine short of the magic figure it needs to form the government on its own. While the Congress and Janata Dal (S)  struck a deal to wrest victory from its grasp, the  BJP, which emerged as the single largest party,  lost no time in staking a claim to form the next Karnataka government.

State BJP chief and its chief minister candidate, B.S.Yeddyurappa met the Governor with other leaders Tuesday evening and requested  him to call his party, the single largest, to form the government and sought a week’s time to help it prove its majority on the floor of the House.

Pointing out that the BJP had won 104 seats, he said  two independent MLAs had already come forward to support it, going by sources close to him. After meeting the Governor, senior BJP leaders like Union Minister Ananth Kumar, D.V. Sadananda Gowda, Muralidhar Rao and Shobha Karandlaje went into a huddle to discuss the party’s strategy for government formation,  which apparently involves weaning away a few Congress  MLAs as well.

Union Home Minister, Rajnath Singh is expected to arrive in the city to help with the strategy, which could be on the lines of the party’s ‘Operation Lotus’,  which helped it come to power in the 2008 Assembly elections when it had 110 seats in its kitty, reveal party sources.

Although discussions were held locally, till Tuesday afternoon, the party’s national leaders had not spelled out their plan of action for Karnataka, they added.

Speaking to the media later, Mr. Yeddyurappa came down heavily on the Congress for its attempts to form the government with the help of the JD(S).