'Ganga Ma will punish you': Mayawati trains guns at BJP

Mayawati went on to say that Congress' 'bad policies and rule' led to the emergence of SP and BSP. 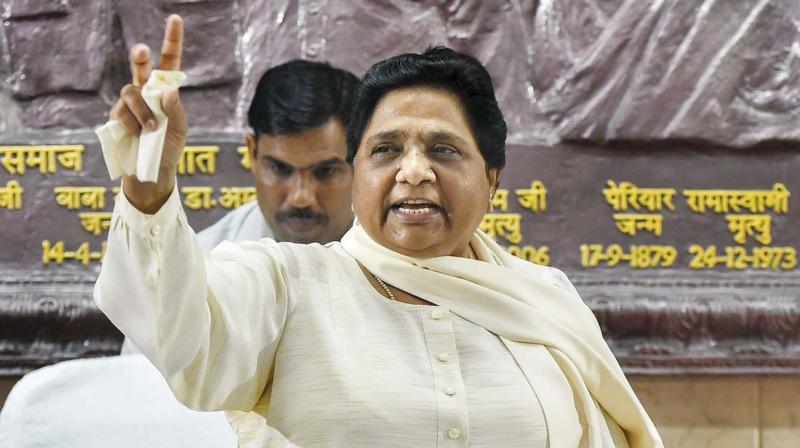 Thirteen parliamentary constituencies of Uttar Pradesh, including Varanasi, will go to polls on May 19 in the seventh and last phase of Lok Sabha elections. Results will be announced on May 23. (Photo: PTI )

Varanasi: With electioneering at its peak for the last phase of Lok Sabha elections, BSP chief Mayawati on Thursday claimed that the same 'Ganga Ma' who helped BJP win the 2014 Lok Sabha polls will punish the party this time around by ensuring its defeat.

"BJP will be known for its hatred and divisive politics. It has only cared about rich businessmen and no poor have been benefited from its policies. It has not delivered what it had promised in 2014. Ganga maa helped you (BJP) by ensuring your victory in 2014, but you did not take the benefit of her blessing. This year she will punish you and throw you out," Mayawati said while addressing a joint election rally with SP Chief Akhilesh Yadav.

Mayawati went on to say that Congress' "bad policies and rule" led to the emergence of SP and BSP.

"We all know, Congress remained in power for a long time but due to its bad decision and policies, it was thrown out of Centre. Benefits were not handed down to Dalits during the Congress regime. It was due to Congress' bad rule that we had to make BSP and SP a few decades ago. If they had ruled well, we were not needed," Mayawati said.

"Congress had always promised to remove poverty but it did not do anything for that. It also promised to provide employment but nothing was done on that front either. That is why people threw them out," she added.

The BSP Chief, while campaigning for BSP-SP candidate from Varanasi Shalini Yadav, claimed that Prime Minister Narendra Modi brought out "no development" in the town, which happens to be his constituency.

"Modi has done no development work in the city and the Centre. Ganga maa has not been cleaned. He has not ensured safety in the country. We have seen a lot of terrorist attacks. Our border is not secure," she said.

Thirteen parliamentary constituencies of Uttar Pradesh, including Varanasi, will go to polls on May 19 in the seventh and last phase of Lok Sabha elections. Results will be announced on May 23.