The opposition party also asked Modi to punish Thakur for her remarks. 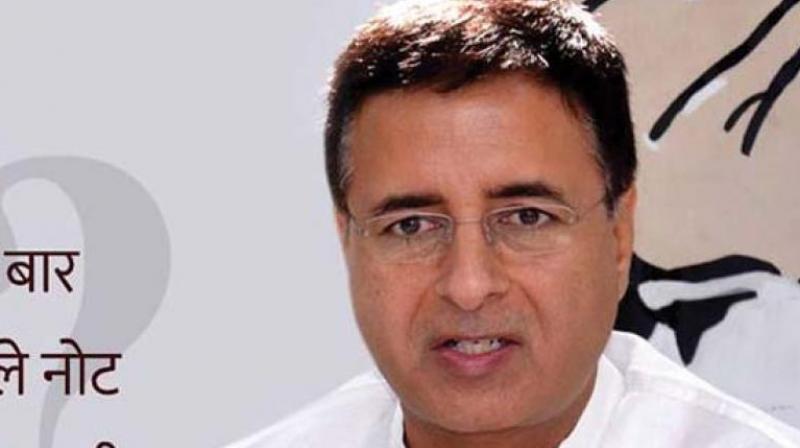 'it is clear, the BJP people are the descendants of Godse,' Congress' chief spokesperson Randeep Surjewala said. (Photo: File)

New Delhi: Hitting out at the BJP over its Bhopal Lok Sabha candidate Pragya Singh Thakur's remarks calling Mahatma Gandhi's assassin a "patriot", the Congress Thursday alleged that insulting martyrs is in the "BJP DNA" and demanded an apology from Prime Minister Narendra Modi.

The opposition party also asked Modi to punish Thakur for her remarks. "It is clear, the BJP people are the descendants of Godse. BJP people say Godse was a patriot and martyr Hemant Karkare was a traitor.

The BJP, through its leaders, is repeatedly launching "malicious attacks" on the Father of the Nation's thinking, path and ideology, Surjewala alleged.

"This is a conspiracy to insult Gandhian principles. This is an unforgivable crime which the country will not forgive," he said.

"If Modi ji has some wisdom then he should punish Pragya Thakur and apologise to the country," Surjewala said.

Malegaon blast accused Thakur kicked up a row after she called Mahatma Gandhi's assassin a "patriot".

The BJP, however, condemned her statement and asked her to tender a public apology.

"We completely disagree with her statement with regard to Mahatma Gandhi. We strongly condemn this statement. The party will seek clarification from her as to why she gave this. It would be proper for her to seek and tender a public apology for her objectionable statement," BJP spokesperson G V L Narasimha Rao said in a statement in Delhi.

Talking to a news channel in Madhya Pradesh, Thakur said, "Nathuram Godse was a deshbhakt (patriot), he is and will remain a deshbhakt. Those calling him a terrorist should instead look at themselves. They will be given a befitting reply in this election."

Thakur's remarks came in response to a question over actor-turned-politician Kamal Haasan's comments that free India's first extremist was a Hindu, a reference to Godse.

Earlier also Thakur found herself in the eye of a storm for her controversial statements that her "curse" killed decorated IPS officer Karkare in the 26/11 Mumbai terror attack and that she was proud to have participated in the 1992 demolition of the Babri Masjid in Ayodhya.