Terror can be defeated by aggressive strategies: PM Modi

Prime Minister Modi was addressing a public meeting in Bihar’s Paliganj where he gave the statement. 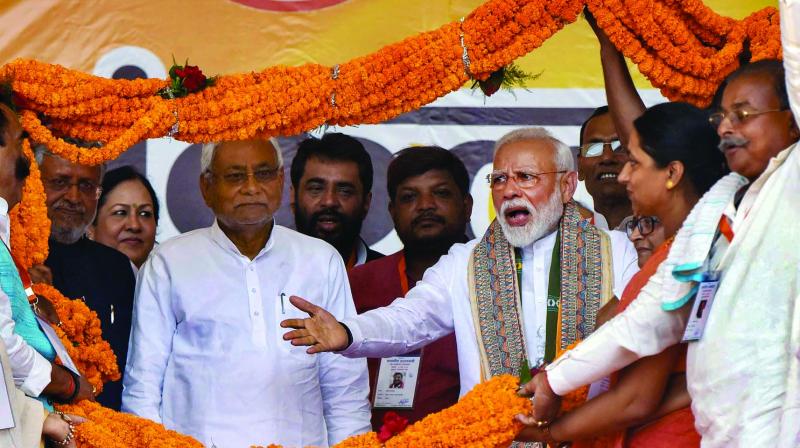 Patna: Prime Minister Narendra Modi on Wednesday stepped up his attack on the Opposition parties for opposing the national security issue and said that that terrorism can be eliminated only by adopting aggressive strategies.

“Is it possible to ignore the national security issue during elections when so many people have lost their lives due to terrorism in the country? I want to tell these Mahamilavatis that terrorism can be eliminated only by adopting aggressive strategies as our government did. We hit them hard by entering into their territory”, Prime Minister Narendra Modi said.

Prime Minister Modi was addressing a public meeting in Bihar’s Paliganj where he gave the statement. This was his third rally in Bihar in less than 24 hours. On Tuesday, he had addressed rallies in Buxar and Sasaram.

Political analysts keeping a tab on the ongoing Lok Sabha elections claim that the final phase of polling is crucial for the BJP as four union ministers have been pitted against the grand alliance candidates in Bihar.

Paliganj comes under the Patliputra constituency where Union Minister Ram Kripal Yadav is locked in a neck to neck contest with Lalu Yadav’s eldest daughter Misa Bharti. “This is my last public meeting during this election but I assure you that I will come again to thank you after elections are over”, Prime Minister said. He also played a Yadav card and urged the masses to “vote for NDA” for the strong government at the Centre.

The Prime Minister also took a veiled dig at RJD chief Lalu Yadav who is serving a jail term in fodder scam case and recalled the 15 — year rule of the RJD in Bihar.