India   Politics  16 May 2019  Won't file FIR against you even if you paint an ugly picture of me: PM to Mamata
India, Politics

Won't file FIR against you even if you paint an ugly picture of me: PM to Mamata 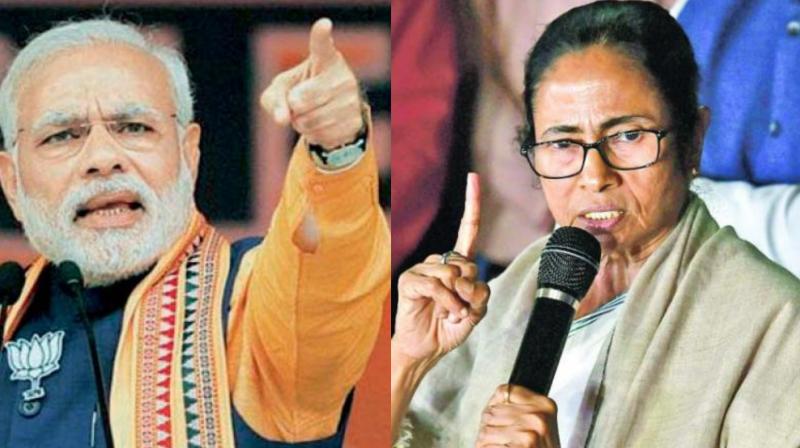 'I have heard you are an artist and your paintings were sold for crores of rupees in the name of Saradha and Narada scam,' PM Modi spoke at an election rally. (Photo: File)

Kolkata: Prime Minister Narendra Modi Wednesday took a swipe at Mamata Banerjee over the arrest of a BJP activist for posting a meme of her, saying the West Bengal Chief Minister should make an "ugly" painting of him which he will heartily receive and preserve for life.

PM Modi said he would never lodge an FIR against the Trinamool Congress supremo for "bhaddi se bhaddi" (grotesque or ugly) painting she makes of him.

"I have heard you are an artist and your paintings were sold for crores of rupees in the name of Saradha and Narada scam," he told an election rally at Taki in Bashirhat Lok Sabha constituency.

Central probe agencies had seized several paintings done by Banerjee that were bought by businessmen running Ponzi schemes who duped lakhs of investors of their money.

"What has happened to you Didi? You have sent a young daughter of Bengal to jail. I ask you to paint a ''bhaddi se bhaddi'' picture of myself and gift it to me. I will preserve it for life. I am telling you I will not file any FIR against you for that," he said.

BJP youth wing activist Priyanka Sharma was arrested from Howrah a few days ago for posting a morphed picture of Banerjee on Facebook. Ms Banerjee's face was photoshopped onto Priyanka Chopra's picture from the MET Gala event in New York where the actor wore a wig.

Sharma was released on bail on Wednesday following a Supreme Court order.