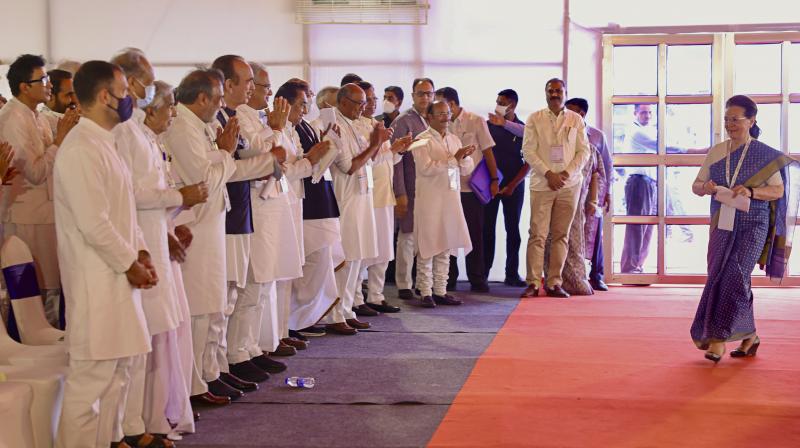 New Delhi: The three-day brainstorming retreat of the Congress in Udaipur came to an end on Sunday with the Congress Working Committee passing the “Udaipur Declaration” that entails wide-ranging organisational reforms to make the party battle-ready for the next round of assembly and Lok Sabha polls.

Mrs Gandhi informed the delegates that the party will set up an advisory group from among Congress Working Committee (CWC) members to deliberate on the political challenges. She added that the Congress will launch a ‘Bharat Jodo Yatra’ from Kanyakumari to Kashmir, beginning Mahatma Gandhi Jayanti on October 2. The party will also launch the second phase of its ‘Jan Jagran Yatra’ at the district level from June 15, she announced.

In its Udaipur Declaration adopted after deliberations at the ‘Nav Sankalp Chintan Shivir’, the Congress also decided to set up three new departments – public insight, election management and national training. It also stressed upon giving wider representation to those under 50 years of age and enforcing ‘one person, one post’ and ‘one family, one ticket’ rules with riders.

To give new people a chance, the Congress decided that no one should hold the same party position for more than five years and that those under the age of 50 would be given 50 per cent representation at all levels of the organization.

The Congress leadership had set up five separate groups – political, economic, social justice, farmers, youth and organizational issues. All these groups submitted their reports to the Congress president. These reports are the bedrock of the Udaipur declaration.

During the deliberations some of the leaders including former Maharashtra chief minister Prithviraj Chavan suggested that the ‘Chintan Shivir’ should pass a resolution saying India will return to paper ballots if the Congress returns to power, a proposition that would require winning votes through EVMs. The political committee, led by Rajya Sabha leader of the Opposition Mallikarjun Kharge, saw several enthusiastic speakers questioning the credibility of EVMs.

The economic panel suggested a rest in the economic policies. Hitting out at the Center, the economy panel led by the former finance minister P. Chidambaram said, “A slower rate of growth has been the hallmark of the present government in the last 8 years.”

The agriculture panel demanded setting up of a national farm debt relief commission to recommend ways and solve debt-related grievances of farmers through conciliation and negotiation as done in the case of industrial loans. The panel also called for enacting a law guaranteeing minimum support price for crops and ensuring that farmers are debt-free.