Speaking to reporters after meeting, Azad said that all those bills which are in the interest of the people 'we are not opposed to them'. 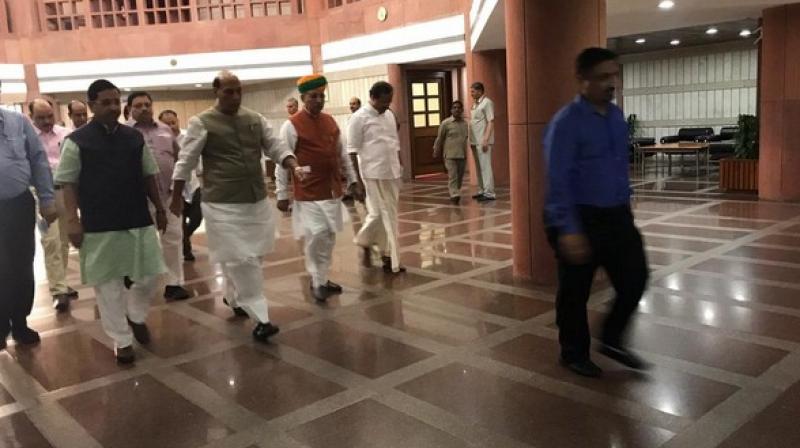 New Delhi: A day before the budget session, an all-party meeting convened by the government was held Sunday in which the opposition demanded that issues such as farm distress, unemployment and drought should be debated upon in Parliament.

The Prime Minister has called a meeting of chiefs of all parties having representatives in Lok Sabha and Rajya Sabha on June 19 to discuss "one nation, one election" issue, celebration of 75 years of India's Independence in 2022, 150 years of Mahatma Gandhi's birth anniversary this year and issues of "aspirational districts", Parliamentary Affairs Minister Prahlad Joshi said after the meeting.

He said the PM has also called a meeting of MPs to discuss the issues on June 20. Speaking to reporters after the meeting, Azad said that all those bills which are in the interest of the people "we are not opposed to them".

There should be a discussion on farmers distress, unemployment and drought, he said. He also called for early conduct of Assembly elections in Jammu and Kashmir, currently under President's rule, asserting that if Lok Sabha polls can be held then why not state polls.

It appears that the Centre wants to run the state through the Governor's administration, he alleged. Congress's Adhir Ranjan Choudhary and K Suresh were also present at the meeting.

TMC's O'Brien demanded that the Women's Reservation Bill, which seeks to reserve one-third of all seats for women in Lok Sabha and state Assemblies, be brought immediately in the session. The first session of the newly-constituted 17th Lok Sabha will be held from June 17 to July 26.