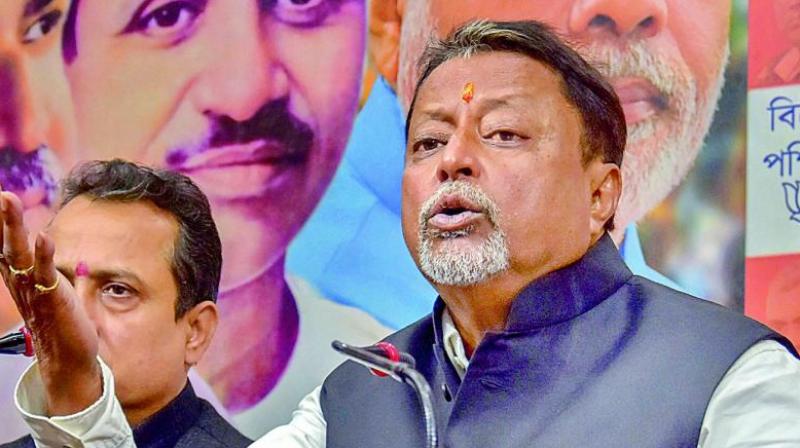 The 50 BJP MLAs on Monday pressed for the use of the anti-defection law on Krishnanagar North MLA Mukul Roy for his return to the TMC from their party last week and his calls to 10 others to follow him. — DC Image

Kolkata:  As the BJP stares at the threat of large-scale defection by its MLAs to the ruling Trinamul Congress and continuous post-poll attacks on its cadres in West Bengal, Governor Jagdeep Dhan-khar flew to New Delhi on Tuesday evening on a three-day visit to look for a way out urgently.

Mr Dhankhar, according to sources, is expected to meet Union home minister Amit Shah and then Prime Minister Narendra Modi apparently to discuss a strategy under the anti-defection law to stop the BJP MLAs’ switch and the post-poll violence in the state. The governor tweeted that he would “return to Kolkata on June 18 in the late afternoon”.

Mr Dhankhar’s itinerary came a day after two dozen MLAs in the BJP’s present tally of 74 were conspicuous by their absence in their party’s delegation of legislators, headed by Leader of the Opposition Suvendu Adhikari, who met him at the Raj Bhavan.

The 50 BJP MLAs on Monday pressed for the use of the anti-defection law on Krishnanagar North MLA Mukul Roy for his return to the TMC from their party last week and his calls to 10 others to follow him. Their demand carried so much priority that it topped the agenda over the post-poll violence in their deputation to the governor, who then assured them of the anti-defection law’s validity in the state.

Before leaving Kolkata, Mr Dhankhar, however, urged Chief Minister Mamata Banerjee in a letter to deliberate on the post-poll violence in her Cabinet and sought to have a discussion with her.

The West Bengal Governor wrote: “With a heavy heart I am constrained to observe your continued silence and inaction over the post-poll retributive bloodshed, violation of human rights, outrageous assa-ult on the dignity of wo-men, wanton destruction of property, perpetuation of untold miseries on political opponents — the worst since Independ-ence — and it ill augurs for democracy.”