The Congress-JDS coalition government is under threat of being reduced to minority as 16 of their MLAs resigned from the assembly. 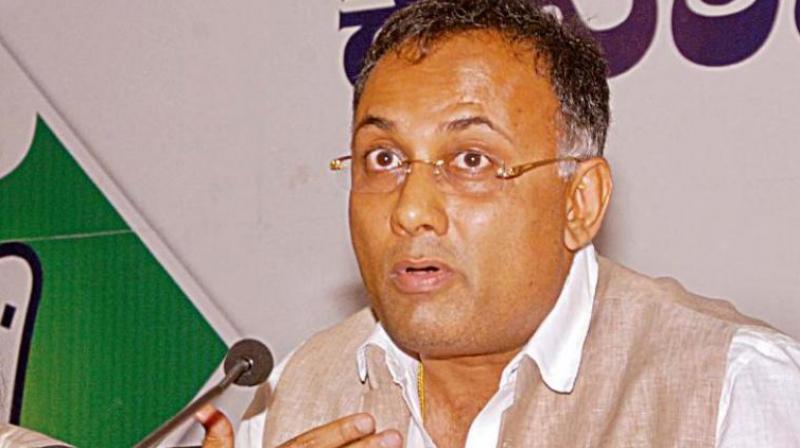 In the 225-member assembly, including the nominated member, the BJP has 107 MLAs and the coalition's strength will dwindle to 101 if the resignations are accepted. (Photo: FIle)

Bengaluru: With just a day left for the showdown in the Karnataka assembly, state Congress chief Dinesh Gundu Rao, on Tuesday, claimed that the party rebel MLAs camping in Mumbai had been locked down and may be disqualified.

Rao took to Twitter to warn the rebel leaders of the possible consequences that may jeopardise their career.

"Just heard. the rebel Congress MLAs in Mumbai are in complete lockdown. Mobiles taken away, can't step outside, (they are) under house arrest," Rao alleged. Posting a smiley with his tweet, Rao said the rebels were in the "clutches of BJP" and were sure to get disqualified.

"Soon they will be waiting in queue for B-forms to get BJP ticket," he added.

The Congress-JDS coalition government is under threat of being reduced to minority as 16 of their MLAs resigned from the assembly while two independents too withdrew their support to the alliance and aligned with the BJP.

In the 225-member assembly, including the nominated member, the BJP has 107 MLAs and the coalition's strength will dwindle to 101 if the resignations are accepted.

The speaker has accepted chief minister H D Kumaraswamy's notice to move the confidence motion to prove his majority on Thursday at 11.30 am.

Rao also accused the BJP of trying to take suspended Congress MLA R Roshan Baig to Mumbai. Baig too has resigned from the assembly.

Baig was detained late Monday night by the special investigation team probing the 'IMA ponzi scheme' at the airport when he was about to fly to Mumbai and he was questioned till 1 pm Tuesday, according to SIT sources.

"The BJP is now escorting Roshan Baig! They were targeting him just a few weeks ago in the IMA scam. Clearly shows their hand in trying to topple the Congress/JDS govt. Doesn't this prove our allegations that the resignations of our MLAs are neither voluntary nor genuine?" Rao tweeted.