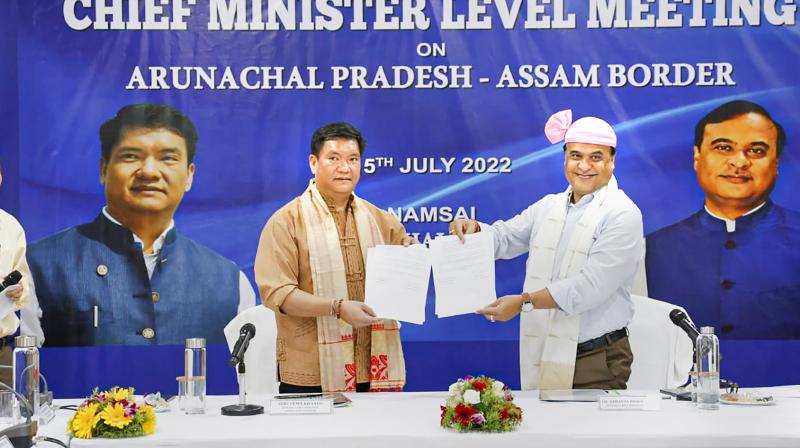 Guwahati: In a bid to resolve the seven decades old inter-state border dispute between Assam and Arunachal Pradesh, the chief ministers of the two neighbouring states on Friday met at Namsai in Arunachal Pradesh and decided to form 12 regional committees headed by Cabinet ministers to find an amicable solution of disputed villages along the border.

Pointing out that there are now only 86 disputed villages on which 12 regional committees headed by Cabinet ministers will take a call after consulting the people at grassroots, Assam chief minister Himanta Biswa Sarma told reporters, "We have asked the regional committees to submit their report by September 15 to resolve this dispute within this year."

Referring to earlier meetings between the two states, Mr Sarma said, "In our meeting held on January 24 in Guwahati, we decided that our dispute of 123 villages won't be expanded. However, now we have come to a conclusion that 28 villages are already within Arunachal's boundary. So the dispute between the two has been confined only to 86 villages, not 123 villages... this is historic."

Recalling that in the April 20 meeting, it was decided that both states will notify their regional committees, Mr Sarma said, "It's been decided today that a report on the same is to be submitted by September 15. All districts have been informed to maintain unity, law and order. No regional committee will go to these districts alone; committees from both states will go together."

Calling it "Namsai declaration", as the meeting was held at Namasai in Arunachal Pradesh, Mr Sarma said that both the states have decided to find an amicable solution to the seven decades old border dispute within this year.

Attributing this development to the effort of Prime Minister Narendra Modi and Union home minister Amit Shah, both the chief ministers lauded the top leadership for guiding them to achieve this landmark move in resolving the long-pending border dispute.

"This Namsai declaration will be sent to the Government of India for further action. In case a concrete resolution comes from any village before September 15, we will send that too. An interim MoU can be signed, to hold talks in case some dispute remains," said the Assam chief minister.

Arunachal Pradesh chief minister Pema Khandu called the meeting historic and said that this is the third meeting between the chief ministers of the two states. He reiterated that the border issue between Assam and Arunachal Pradesh is seven decades old. "The vexed issue of the Arunachal-Assam border dispute has been lingering for more than seven decades, but now we are keen to resolve the dispute. We should be able to do it by this year," said Mr Khandu.

Senior Cabinet ministers of both -- Assam and Arunachal Pradesh also attended the meeting.