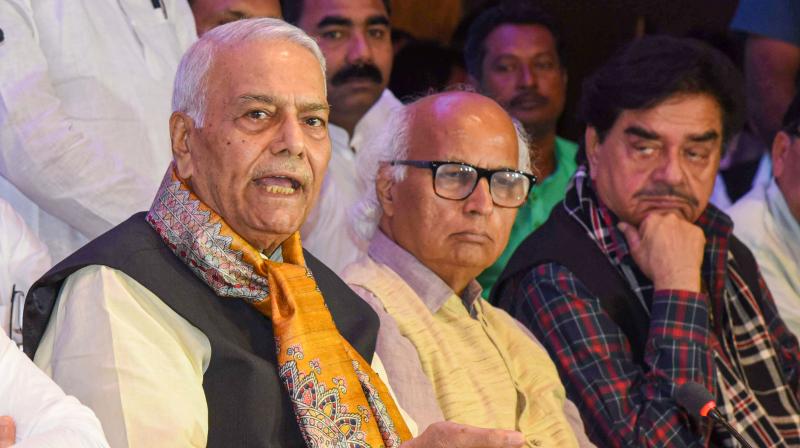 Mumbai: The Opposition's candidate for the next week's Presidential election, Yashwant Sinha, has cancelled his visit to Mumbai scheduled on Saturday in the wake of the Shiv Sena announcing support for the National Democratic Alliance's (NDA) nominee Droupadi Murmu.

"Sinha's visit to Mumbai, where he was scheduled to meet and address the Maha Vikas Aghadi (MVA) legislators, has been cancelled," an NCP leader said.

The visit has been cancelled because Shiv Sena president Uddhav Thackeray has announced his party's support to Murmu, he added.

On Tuesday, Thackeray had announced that his party would support Murmu, saying that this is the first occasion wherein a tribal woman is getting the opportunity to become the President. He had said that several party leaders, especially from the tribal community like MLC Aamshya Padvi, former MLA Nirmala Gavit, and Eklavya Sanghtana's Shivajirao Dhavale had urged him to back Murmu, although there was no pressure on him.

The Shiv Sena has 19 MPs in Lok Sabha, including 18 from Maharashtra. It has three MPs in Rajya Sabha, 55 MLAs, although 40 of these legislators have sided with the faction led by Chief Minister Eknath Shinde.

The Sena headed the MVA government also comprising the NCP and Congress. However, it collapsed on June 29 following a rebellion by Shinde.

Polls to elect the next president will be held on July 18. The race for the Rashtrapati Bhavan will be between Murmu and Sinha.

After getting the support of some regional parties like BJD, YSR-CP, BSP, AIADMK, TDP, JDS, Shiromani Akali Dal and Shiv Sena, the vote share of Murmu has already crossed 60 per cent. It was around 50 per cent at the time of her nomination.

Murmu had visited Mumbai on Thursday as part of her poll campaign, and met the BJP MLAs and MPs from Maharashtra as well as the legislators of its allies including the Shiv Sena faction led by Shinde. PTI MR