The Karnataka Chief Minister said the Prime Minister 'understood every thing' and soon he will be sending a team for assessment. 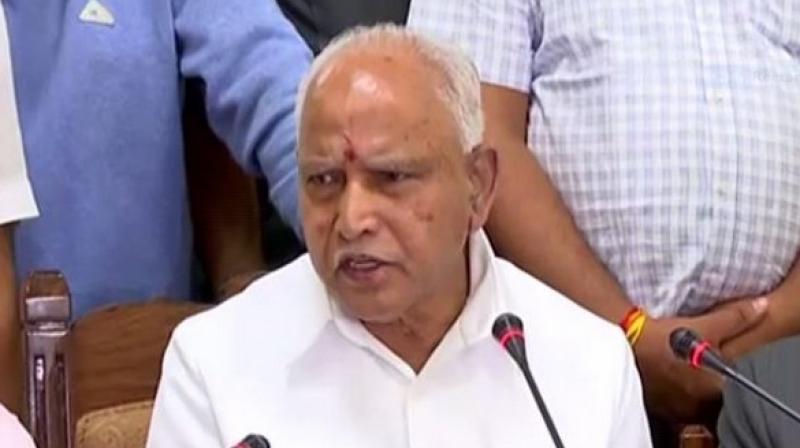 Responding to his appeal, the Prime Minister assured tosend central study team soon to assess the damage due to the floods, the Chief Minister said in the national capital after the meeting. (Photo: File)

Bengaluru: Karnataka Chief Minister B S Yediyurappa on Friday met Prime Minister Narendra Modi in New Delhi and appealed for release of funds immediately to take up relief works in the flood and rain-ravaged state.

Responding to his appeal, the Prime Minister assured tosend central study team soon to assess the damage due to the floods, the Chief Minister said in the national capital after the meeting.

"State is hit by a calamity that has not taken place in the last 108 years. Fifteen days ago there was drought situation, but today dams are full and because of excess waterreleased from Maharashtra there is damage caused, about all these things we have brought to the notice of the Prime Minister," Yediyurappa said.

The Karnataka Chief Minister said the Prime Minister "understood every thing" and soon he will be sending a team for assessment.

"We have asked for release of funds as immediate relief. He (PM) said, he will discuss and let us know. I'm confident that he is in know of the situation in the state as he has already gathered information. Let's wait and see," he added.

Recently, Yediyurappa had requested the Centre to releaseRs 3,000 crore as interim relief immediately to take up rehabilitation work.

Hitting out at the BJP-led Central government over the "delay" in announcing relief, despite Union Home Minister Amit Shah and Finance Minister Nirmala Sitharaman personally assessing the situation, the opposition parties-both Congress andJD(S) had demanded immediate release of Rs 5,000 crore as interim relief.

Asked if there was any assurance from the Prime Minister on Rs 3,000 crore as immediate relief, Yediyurappa merely said: "According to an estimate lossis over Rs 40,000 crore."

According to a release from the Chief Minister's office,during the 45-minute meeting Chief Minister appraised the PrimeMinister about the grave situation of the flood-hit areas inthe state and explained that the losses suffered due to floodswas unseen before, and more funds are required to take up relief measures and rebuild the lives of the victims.

Read: Yediyurappa in Delhi for next 2 days to discuss K'taka cabinet expansion

The death toll in flood and rain ravaged Karnataka hasreached 62 till Thursday night, while 14 people are still classified as missing, and nearly seven lakh people have been evacuated till date.

As many as 943 relief camps are operational, where clean drinking water, food and other relief materials are being provided to 3,57,243 people housed in them.

According to the government, 103 taluks in 22 districts have been affected by floods and incessant rains in the past few days, resulting in loss of agriculture and horticulture crops on 5.35 lakh hectares and damaging 71,234 houses.