For the first time in many years, the Internet and mobile phone services remained unaffected on ID in J&K 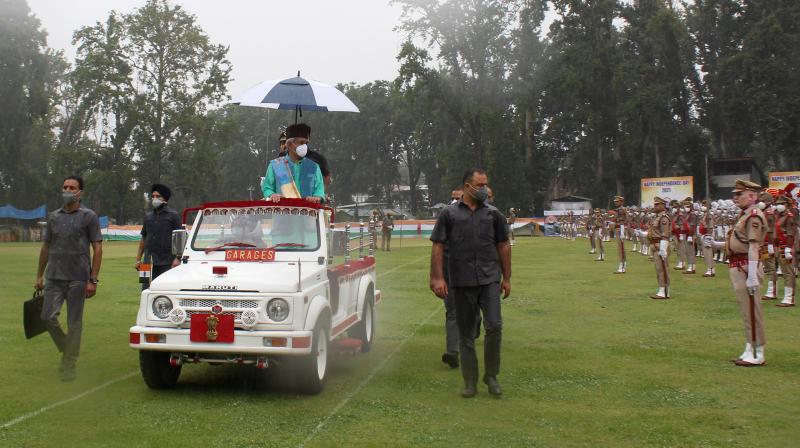 While speaking at the main ID function in Srinagar’s Sher-i-Kashmir Cricket Stadium, J&K Lieutenant Governor, Manoj Sinha, said that the “jungle raj” in the erstwhile state ended on the “eve of 2020” and the grassroots level democracy was strengthened in the UT through the conduct of “violence-free” district development council (DDC) elections. — DC Image

Wani is the Principal of the Government-run girls higher secondary school at Tral. The Jammu and Kashmir government had as part of the ‘Azadi Ka Amrit Mahotsav’ programme made it mandatory for the heads or other officials of all government departments including educational institutions of the Union Territory to unfurl the tricolour flag at their respective premises amid singing of the national anthem on the ID. The official sources claimed that the national flag was hoisted at as many as 23,000 schools, colleges, universities and other educational institutions across the UT on Sunday morning.

Burhan Wani’s killing by the security forces on July 8, 2016 had sparked off a widespread unrest across Kashmir Valley and some parts of the Jammu region of the erstwhile state which had continued for almost six months during which more than eighty people died, most of them in security forces’ firings.

Muzaffar Wani had on Saturday denied social media reports that he had quit the government job as he was faced with coercion to hoist the national flag at the institution he is heading.

The tricolour, as per the instructions of the government, was hoisted in all government buildings and important public places on or ahead of the ID in the UT including at Durrani fort atop Srinagar’s Hari Parbat or Koh-e-Maraan built during the region of Afghan ruler Shuja Shah Durrani in 1808. The 24 x 36 feet flag installed at the historic fort is visible from most parts of Srinagar city. Earlier the Indian Army had installed a 100 feet tall tricolour at the Valley’s premier resort Gulmarg where ‘Ghanta Ghar’ or clocktower at Srinagar’s historic city centre Lal Chowk (Red Square) was illuminated in tricolour on the eve of ID.

The ID is being celebrated in J&K and Ladakh amid tight security arrangements. In the Valley as well as Jammu region of the UT of J&K, police sharpshooters and elite commandos drawn from various security forces were seen standing guard atop  buildings around the venues of ID ceremonial parades and other functions whereas heavily equipped security personnel remained deployed on ground. The security arrangement made in Srinagar also entails the use of hi-tech Unarmed Aerial Vehicles (UAVs) or camera-fitted drones to maintain aerial surveillance whereas Quick Reaction Teams (QRTs) have been deployed at various places to meet any eventuality. Dog and bomb disposal squads are also in a state of readiness, the official sources said.

However, for the first time in many years, the Internet and mobile phone services remained unaffected on ID in J&K. These services would be snapped as a precautionary measure on Independence and Republic days in restive J&K as part of the security bandobast. Also, unlike in the past no restrictions on the movement of people in Srinagar and other parts of the Valley were imposed on Sunday.

On Saturday evening, some parts of the Valley witnessed celebrations including lighting of firecrackers and waving of Pakistan’s national flag by groups of youth to mark the Independence day of the neighbouring country. A video of one such rally held in central Srinagar went viral on social media.

While speaking at the main ID function in Srinagar’s Sher-i-Kashmir Cricket Stadium, J&K Lieutenant Governor, Manoj Sinha, said that the “jungle raj” in the erstwhile state ended on the “eve of 2020” and the grassroots level democracy was strengthened in the UT through the conduct of “violence-free” district development council (DDC) elections.

He said that the abrogation of Article 370 of the Constitution on August 5, 2019 marked the beginning of a new era for J&K. “The grass-roots democracy has been strengthened, fulfilling the hopes and aspirations of the common citizens. With the spirit of Kashmiriyat which is to take along all religions and creeds on a development odyssey, we are achieving new milestones,” he asserted.

He said that terrorism was a curse for peace and development and, without naming it, blamed Pakistan for making attempts to instigate the youth of J&K for violence and subversion. He said, “We want to assure all citizens that whoever is trying to mislead the young people through proxy war, shall be given a befitting reply. The neighbouring country, which does not care for its own people, has been making a malicious attempt to instigate some of our youth.”