Members of the Upper House were participating in a discussion on 'COVID-19 pandemic and steps taken by the Government of India'. 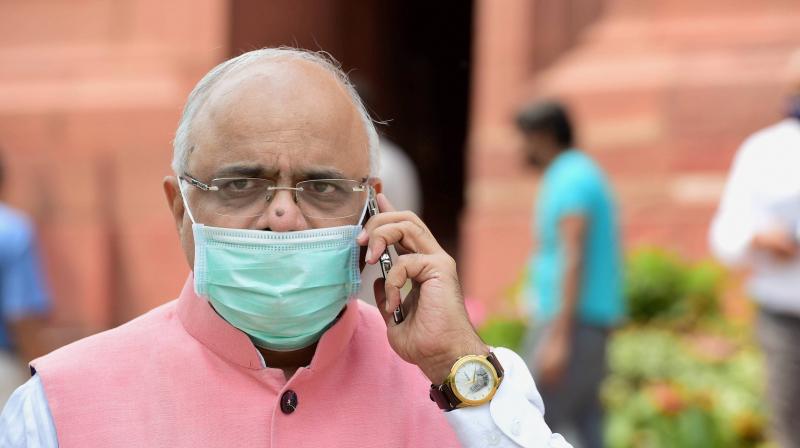 New Delhi: Opposition parties in Rajya Sabha on Wednesday questioned the Modi government's claim that the lockdown helped prevent over 29 lakh COVID-19 cases and thousands of deaths, and said it should have ensured better coordination with the states.

Members of the Upper House were participating in a discussion on 'COVID-19 pandemic and steps taken by the Government of India'.

Several opposition members, including from the DMK and CPI (M), also pointed out that the government took almost two months to impose the lockdown after the first case came to light in January, and claimed the delay had proved costly.

Some of them also took a jibe at the government saying it was busy hosting US President Donald Trump, who was on a two-day India trip in the last week of February.

He argued that the people of the country should know if the lockdown really helped in containing the spread of the disease and sought compensation for the migrant workers who died during the lockdown.

"He (health minister) has said that it has been estimated that this decision prevented approximately 14 to 29 lakh...and 37,000 to 78,000 deaths...The House must be informed as to what is the scientific basis on which we have reached this conclusion that but for the sudden lockdown, the number of cases could have risen up to 29 lakh," Sharma said.

He was of the view that the Centre should have taken the state governments into confidence so that they could have prepared better for the lockdown.

"Were we prepared for the lockdown? I am not levelling any allegation as nobody in the world was prepared, but you could have spoken to the states, alerted them ... to make preparations at the district level...

"This did not happen so what happened was that in four hours railways stopped. This led to painful scenes and the picture of the country which went out was not good," Sharma said, adding the sudden decision led to immense problems to the migrant labourers.

Sharma said that the government has in a reply stated that no compensation has been given because there are no figures regarding the death of migrant workers during the lockdown.

"This is such an unfortunate situation for the country. Why don't you have figures? Every state knows who died. They should be given compensation," the Congress leader said.

He said for the future the government should make a database regarding migrant workers in the country.

"There should be a register and those people who live in cities who did not get food security, ration, please find a solution for such exigencies," Sharma said.

Referring to an article in a leading medical journal which questioned the credentials of Hydroxychloroquine, Sharma said, "They had to take it back because it was completely fabricated... a case should be filed here as well because the pharma lobbies, as it is an affordable drug, want to discredit it."

Accusing the Centre of not consulting experts to draw a strategy to deal with the COVID-19 pandemic, All India Trinamool Congress (AITMC) MP Derek O' Brien said that the central government should not use the pandemic "to convert democracy into autocracy".

"Did you consult global experts?... We set up a Global Advisory Committee with half a dozen people...The problem is that when things are going good, you want to take the credit and when things are tough, you start talking about the chief minister and bulldoze us in a serious speech like this," he said.

He asked if the Centre transferred funds to the informal sector and migrant workers, as demanded by the 12 opposition parties.

"You need humility...This government needs humility to work together with states. You don't know at all...Unless you have this one thing how will we go forward," O'Brien said.

He also took a swipe at the government over the PM CARES Fund.

"The most opaque and dark fund in the world is called the Prime Minister's couldn't care less fund. Oh! I said the name wrong," he said.

"The first case was detected in January and the self-imposed curfew started from March 23," he said.

According to him, the lockdown was delayed for the "gala welcome" of the US President Donald Trump, who was here on a two-day visit on February 24 and 25.

Swapan Dasgupta, a nominated member, said the government should clear the confusion caused by claims that India is "under-reporting" its numbers and urged the health minister to come out with some clarification over the statistical robustness of the figures.

BJP MP Vinay P Sahastrabuddhe said that the Centre held discussion with state chief ministers and secretaries around 15 times and no one during their conversation even once said that the lockdown should not have been imposed.

He criticised the Maharashtra government over its handling of the pandemic, claiming ther is a lack of coordination among officers and political leaders in the state.

Samajwadi Party MP Jaya Bachchan said even her family members suffered due to the pandemic.

"The way people were being treated in hospitals, the way Mumbai roads are getting sanitised every hour, it is incomparable. There should be no politics on this subject," Bachchan said.

K Keshava Rao of TRS said that there was a need for better coordination between the Centre and the state governments for handling the pandemic.

Elamaram Kareem (CPI-M) cited data from CMIM (Centre for Monitoring Indian Economy) to claim that around 15 crore people have lost jobs and alleged that the government has not taken any steps to address the situation.

While talking of the COVID-package, Kareem said that it is just one per cent of the GDP, while the packages from other countries are up to 21 per cent of their GDP.

Manoj Jha of the RJD also raised the issues of workers who were turned down by their employers during the pandemic.

Earlier in the day, Santanu Sen of AITMC recalled that in the initial days of the COVID-19 pandemic, when his party members were wearing masks they were asked to remove them by the Chair.

To this, Rajya Sabha Chairman M Venkaiah Naidu said: "At that time, the Chair was guided by the guidelines issued by ICMR. On that day, when this comment was made, there was no such thing."