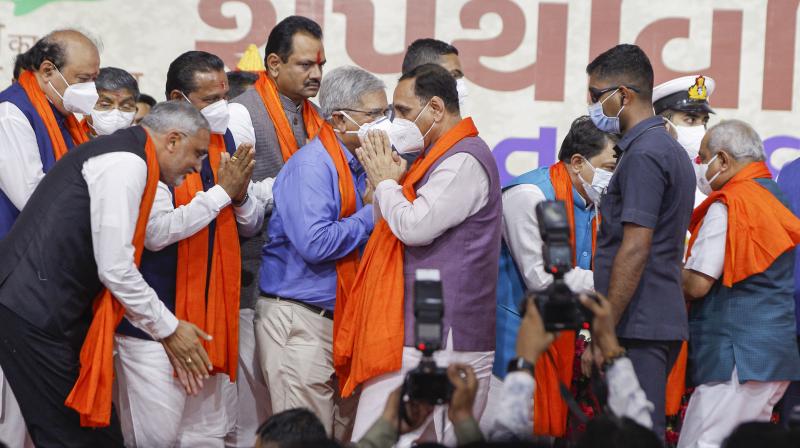 New Delhi: Keeping in mind the “Patel factor” in Gujarat’s politics and also the “anti-incumbency” issue, the BJP, which has been ruling Prime Minister Narendra Modi’s home state since 1998, went in for a complete overhaul of its council of ministers, led by a new chief minister. It is perhaps for the first time that the entire council of ministers in a state has been changed. After going in for a new chief minister, the BJP top brass changed the entire team of previous CM Vijay Rupani, bringing in new and “younger” faces to assist CM Bhupendra Rajnikant Patel. With this decision, the BJP has also tried to contain the growing fatigue with the ruling party, which has been in power in the state since 1998.

Congratulating the new council of ministers, Prime Minister Modi tweeted: “Congratulations to all party colleagues who have taken the oath as ministers in the Gujarat government. These are outstanding karyakartas who have devoted their lives to public service and spreading our party’s development agenda. Best wishes for a fruitful tenure ahead.”

The decision to change the entire government, when crucial Assembly polls are due by the end of next year, indicated that the BJP top brass put into place a rare corrective measure after taking into consideration that it will be met with minimal resistance or will cause minimal damage to it. While the swearing-in of the new ministers had to be delayed by a day after speculation that some outgoing ministers were miffed over reports that they would be replaced, the BJP top brass did not meet any tough resistance. Both the Patel and OBC communities have now got equal representation in the new team with eight ministers from each side.

Most new ministers have not been part of any earlier government. Not just the Patel community, the new team has representation of other castes, including OBCs, Brahmins and Kshatriyas, among others.

In political circles, it was felt that this development has the hallmark of Mr Modi, who is known for taking such “drastic measures” and giving an opportunity to new members, in both the organisation as well as in the government. Speculation is rife that the BJP top brass’ move to change the CM at this juncture was also to assess Mr Patel’s leadership skills and administrative qualities before the Assembly polls.

The feedback reaching the BJP top brass, it was learnt, had suggested that the “palpable fatigue and anti-incumbency” against the BJP, including under Mr Rupani’s leadership, could hurt the party in the Assembly polls. Also, Mr Rupani was a non-Patel when the Congress is likely to project its working president in the state, Hardik Patel, as the contender for the top post, that could also impact the BJP’s prospects. Therefore, the decisionwas taken to nominate a first-time MLA and a Patel leader, Bhupendra Patel, as the CM. There were also reports of friction between Mr Rupani and state BJP chief C.R. Patil.

The feedback, it is learnt, was also that the Congress’ internal fights and factionalism will make it tough for the main Opposition party to outdo its performance in the last Assembly polls, but it could help the AAP gain more ground in the state. For the BJP’s poll managers, the AAP’s good show in the recent Surat municipal polls was due to the Congress’ refusal to back Hardik Patel’s Anamat Sangarsh Samiti members, who had then contested from the AAP.

The BJP’s decision to go in for a new team in Gujarat is also seen as its strategy to better its previous performance when its tally came down from 2012, even though it retained power in the state. The 2017 NOTA percentage had also damaged the BJP’s performance in some seats. The party had won only 99 Assembly seats that time and the party’s poll managers do not want a repeat in 2022.