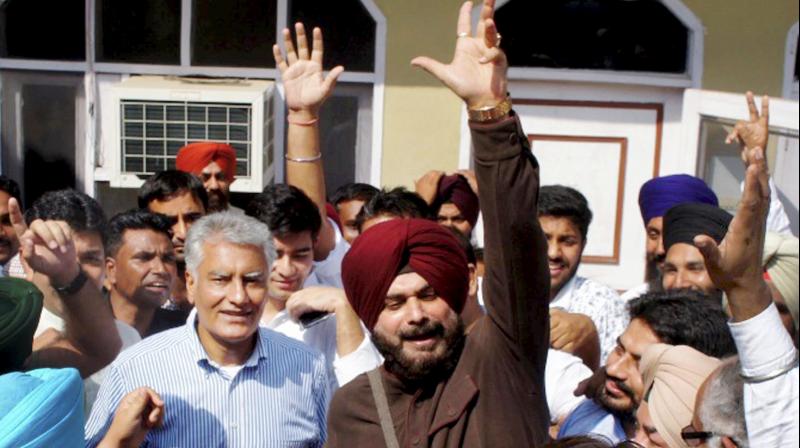 Gurdaspur (Pb): Punjab cabinet minister and former cricketer Navjot Singh Sidhu on Sunday likened the Congress’ victory in the Gurdaspur Lok Sabha bypoll to winning a Test cricket match by an innings and said it would have a demoralising effect on the BJP-SAD combine.

Mr Sidhu said, “This win is a big slap on the face of jija- sala (Sukhbir Badal-Bikram Majithia). Today, the BJP will feel that the Akali Dal in Punjab, especially the jija-sala, have become a burden.” “Time and again people have reprimanded them and sent them back,” he said, adding the Akalis were like an albatross around the BJP’s neck. Mr Sidhu, who switched over to Congress from the BJP just before the Punjab Assembly polls, said, “We have sent a beautiful Diwali gift packed with red ribbon to our (Congress) would-be president Rahul Gandhi because it sets the tone... It will be a shot in the arm for the Congress.”

“This win is not small, this is huge. When a (cricket) team loses by five runs or by a narrow margin, it still stands up to put a fight in another contest. But when somebody loses by 400 runs or suffers an innings defeat, it breaks the back.

“It is an innings defeat for them (SAD-BJP combine). It is a demoralising defeat for them, it has sent them packing,” he said. On the fact that the Congress’ win in Gurdaspur bypoll would not make much difference to the NDA tally in the Lok Sabha numerically, Mr Sidhu said, “The mental scars will remain because it is a mental game.” “We (Congress) need at least one or two years to bring in development,” added Mr Sindhu.