In the final phase, the electorate comprising a total of 2,50,794 voters will seal the fate of 156 candidates. 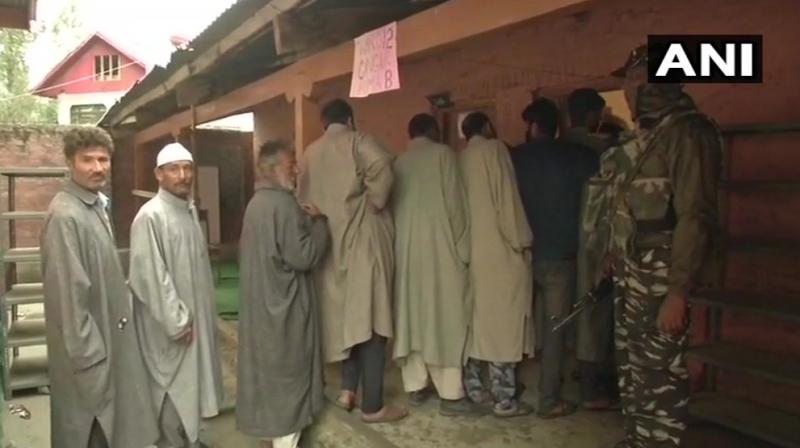 Counting of votes cast during all four phases will be done on October 20. (Photo: ANI/Twitter)

Srinagar: The fourth and final phase of the urban local body polls in 37 wards in central Kashmir's Srinagar and Ganderbal districts has begun. Polling began at 6 am and is slated to end at 4 pm.

In the final phase, the electorate comprising a total of 2,50,794 voters will seal the fate of 156 candidates in Srinagar and Ganderbal districts.

A total of 12 wards are going to polls in the Municipal Committee Ganderbal with a total electorate of 8491 voters. 38 candidates are in the fray for in Ganderbal and voting shall take place at 12 polling stations.

Meanwhile, 24 wards of the Srinagar Municipal Corporation are also going to polls, with a total electorate of 2,41,043 voters. 113 candidates are in the fray for these 24 wards.

Also, repolling is being conducted at a polling station in Makhdoom Sahab (Ward No 41), where five candidates are in the fray with a total electorate of 1,260 voters.

A voter turnout of 3.7 per cent was recorded in Ganderbal district, while 0.4 per cent of the voters in Srinagar were accounted for by 8am.

In the wake of the polls, security has been beefed up at polling stations, while checkpoints have been set up in Srinagar and Ganderbal, where vehicles and commuters are being searched thoroughly to ensure seamless completion of polls.

The fight is between the Congress and the Bharatiya Janata Party (BJP) as Jammu and Kashmir's two major parties- National Conference (NC) and the People's Democratic Alliance (PDP)- have boycotted the elections over lack of clarity in the Centre's stand on Articles 35A.

Article 35A disallows people from residing in Jammu and Kashmir, buying or owning immovable property in the state, settling permanently, or getting state government jobs.

Counting of votes cast during all four phases will be done on October 20.