Nitish, however, did not comment about Sushil Kumar Modi’s role in the next government 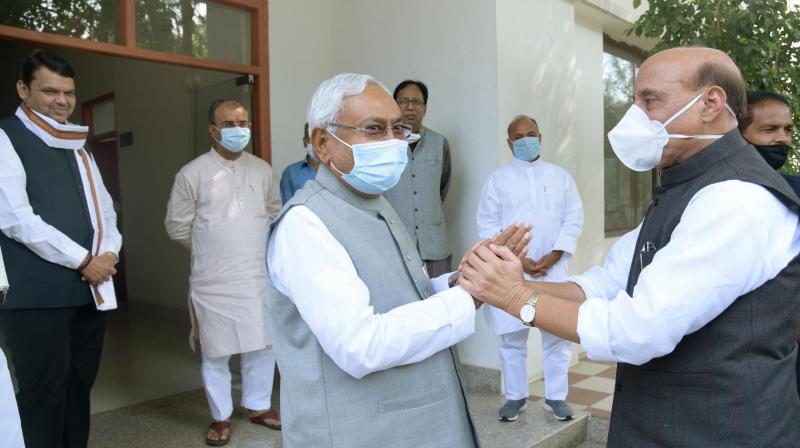 Patna: JD(U) Chief Nitish Kumar on Sunday met Bihar governor Phagu Chauhan and staked claim to form the next government in the state. Earlier, he was unanimously elected as NDA’s legislature party leader in a meeting held at his official residence in Patna.

Union Minister Rajnath Singh, former Maharashtra Chief Minister and Bihar poll in-charge Devendra Fadnavis, along with other central leaders were present in the meeting when he was elected as the NDA legislature party leader.

"I met the governor and handed him the letter of support from all the four constituents of NDA. The oath will take place on November 16 at around 4.30 PM," Nitish Kumar said after he met the governor Sunday afternoon.

“All these things issues will be sorted out before the oath ceremony. We have to prepare a list of MLAs who will also be taking oath on Monday,” Bihar CM Nitish Kumar said.

One of the names being floated by a section in the BJP is that of four times MLA from Katihar, Tarkishore Prasad. Sources said that the party may also declare two deputy CMs for the first time in the state similar to the Uttar Pradesh model.

Tarkishore Prasad was elected as the BJP’s leader in the state Assembly during the party’s meeting on Sunday. When asked about his reaction Prasad told reporters, “The party has given me a responsibility and I will carry out the duty to the best of my ability."

He, however, did not comment when asked whether he was the party’s choice for the post of next deputy CM of the state. “I cannot comment on the issue as I am not aware of the development”.

As reports of Sushil Kumar Modi’s exit surfaced in the media, he tweeted and said that no one can take away the post of a party worker from him.

“The BJP and RSS have given so much to me in the 40 years of my political career that perhaps no other leader would get it.  I will accept whatever responsibility the party would give me in the future. No one can take away the post of party worker from me,” Sushil Kumar Modi said in a tweet.