BJP may not give tickets to relatives of MPs, MLAs 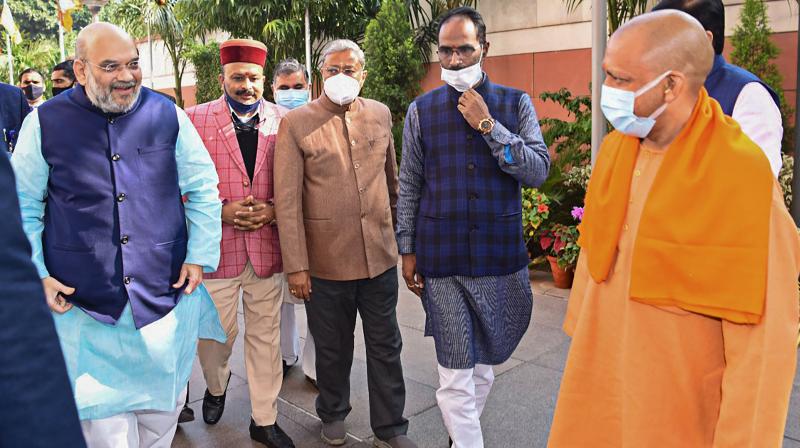 New Delhi: Union home minister Amit Shah is likely to hold a series of meetings and spice up the campaign in Uttar Pradesh from next week as the party looks to retain power in the state which is vital for the Lok Sabha elections scheduled in 2024.

Elections in UP will be held in seven phases from February 10, and the results are scheduled on March 10.

With the Election Commission having extended the ban on public meetings and roadshows till January 22, and the BJP leadership busy finalising its candidates for the Assembly polls in five states, Shah will start his tour after Saturday and hold meetings, including with organisational leaders, to cover the whole of the state.

In his first round of campaign meetings, in December, Shah had said the Yogi Adityanath government had put an end to the “ABCD” of the Samajwadi Party, listing ‘apradh aur aatank’ (crime), ‘bhai bhatijawad’ (nepotism), corruption, and ‘danga’ (riots).

Even if the ban remains in place, the EC has allowed indoor meetings under certain conditions, sources noted.

In an informal interaction, a senior BJP leader expressed confidence that the BJP will repeat its 2017 feat when it had won more than 300 seats in the 403-member Assembly, saying that the Yogi Adityanath-led government's performance on the issue of law and order and corruption, besides the welfare programmes of the Modi government at the Centre, will win over people's support.

Asked about a string of defections from the BJP to its main rival Samajwadi Party, including of OBC leader Swami Prasad Maurya, and their allegation that the ruling party was anti-backward castes, the party leader said these leaders claim to represent their castes and what may have prompted their resignation is that the BJP has been successful in winning over these communities, leading to their marginalisation.

The kind of representation backward castes like Maurya, Saini or Nunia have received in the BJP's organisation and in its government is there for all to see, he said, claiming that the Samajwadi Party had never given these communities any position. Whatever these defectors may say, these communities have no reason to not support the BJP, he added.

With party leaders seeking tickets for their kin, a senior BJP leader said any relation of a party member who is already holding an elected position like an MP or MLA is unlikely to be fielded. This rule will not apply to those who are already MLAs, he added.

Voters in Uttar Pradesh have been giving a clear mandate in last several polls and the BJP is sure that it won't be any different this time, he said.

SP president Akhilesh Yadav has been targeting the BJP over the alleged non-performance of its state government and has been working to broaden his party's base by inducting leaders from rival parties.

The BJP has announced its candidates for 107 seats in Uttar Pradesh and is likely to announce its nominees for the remaining seats in the coming days, besides for four other poll-bound states -- Uttarakhand, Punjab, Goa and Manipur. Stakes are high for the BJP as it is in power in four of the five states.