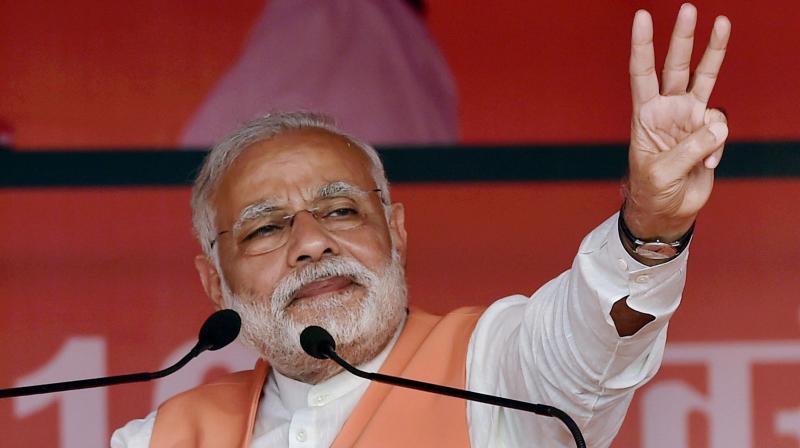 Lucknow: As Assembly elections in Uttar Pradesh enter their third phase with central UP going to polls on Sunday, top political leaders took on each other Thursday, triggering a fresh bout of blame game.

Prime Minister Narendra Modi alleged at a rally in Hardoi that UP accounts for maximum political killings in the country, yet chief minister Akhilesh Yadav “proudly claims that kaam bolta hai.”

The PM also claimed that he is UP’s adopted son. “Lord Krishna was born in UP, but Gujarat was his karam bhoomi. Similarly, I was born in Gujarat, but UP has adopted me. I am not a son who will forsake his parents,” he said, in an apparent reference to differences between the CM and his father Mulayam Singh Yadav. The PM urged people to rid the state of “a cycle of SP, BSP and Congress regimes.”

The UP CM returned fire at a rally in Mainpuri where he said that the BJP had failed to keep its promise of “achche din”, and that people had suffered due to demonetisation. He said that he had learnt how to “cycle fast”, and would leave the BSP’s “elephant” and the BJP’s “lotus” far behind.

Congress vice-president Rahul Gandhi, while addressing a rally in Sitapur, said that Mr Modi had made the entire nation stand in queues (during demonetisation) because he wanted to grant favours to his 50-odd rich friends. “The PM should tell us how much black money he unearthed and how many corrupt people went to jail after demonetisation,” he said.

During his speech, Mr Modi said that the decision of demonetisation had been taken in favour of poor people, and the rich were disturbed because of it. The PM also accused the BSP of looting the state.

BSP chief Mayawati, at her rally in Fatehpur, said that the BJP was trying to mount pressure on her, but she would not succumb to it. She warned that if the BJP came to power, it would end reservation.

Polling has taken place for 140 seats in the first two rounds in the state. A total of 263 seats will go to polls in the next five phases that will take place on February 19, 23, 27 and March 4 and 8.