‘These very people want to float a new party...the election here is different from what is being fought in the state,’ he said. 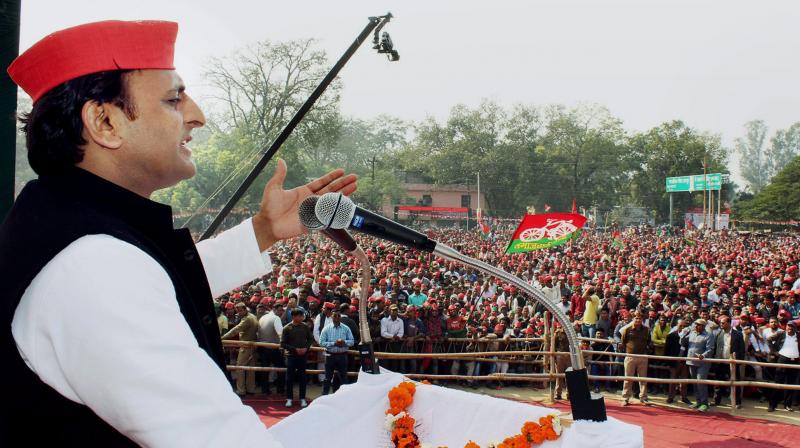 Etawah: Targeting his uncle Shivpal in the SP bastion Etawah, Uttar Pradesh Chief Minister Akhilesh Yadav told the electorate that he was leading "the real" Samajwadi Party and warned those out to weaken him.

"Those in whom I had confidence have created a rift between me and Netaji (Mulayam). They wanted to snatch the 'cycle' (SP symbol) from me," Akhilesh said at his first election meeting at the exhibition ground here last night.

In a clear reference to his estranged uncle, Shivpal Yadav who is contesting from the neighbouring Jaswantnagar seat, Akhilesh said, "These very people want to float a new party...the election here is different from what is being fought in the state. Here efforts are to defeat me...people of Etawah should not fall prey to any such design."

"Thousands of people are sitting here. Ours is the real Samajwadi Party. It is a fact that my visit here has not been frequent but then the situation was different. But I will take care of Etawah and spend more time," he said here.

On the day he filed his nomination papers, Shivpal had announced that he will float a new party once the elections are conducted in the state.

"Some people had conspired to throw me out of the party, but I did not allow them to succeed in their designs...I have worked for development and brought welfare schemes but they wanted to weaken me," Akhilesh said without taking any name.

Meanwhile, Shivpal said he has Mulayam's blessings and refused to comment on Akhilesh's remarks.

"I have Netaji's (Mulayam) blessing and whatever he orders, I will always abide by it," he said.