The governor gave Palanisami 15 days to seek the vote of confidence of the Assembly. 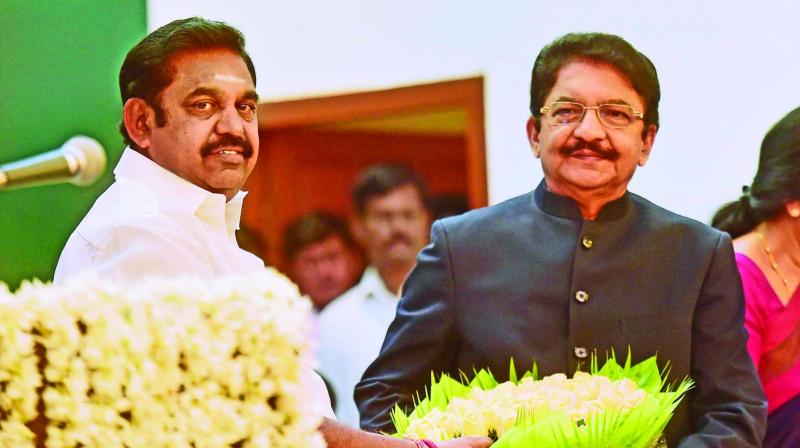 AIADMK chief V.K. Sasikala, who was convicted of corruption on Tuesday in the midst of a succession war with Mr Panneerselvam, had the last laugh from her prison cell in Bengaluru when state governor Ch. Vidyasagar Rao swore in her nominee. The governor gave Mr Palanisami 15 days to seek the vote of confidence of the Assembly.

He will, however, take a floor test on Saturday to prove that he has the support of at least 117 MLAs in the 234-member legislature. He has said he has the backing of 124 of the AIADMK’s 134 MLAs. The caretaker CM, who seems woefully short on numbers, said his “fight would continue”.

Mr Palanisami, clearly on Ms Sasikala’s advice, inducted in his 31-member Cabinet the party’s new number two, K. Sengotaiyyan, in place of “MaFoi” K. Pandiarajan, who had shifted his loyalty to Mr Panneerselvam. The rest of the Cabinet stays the same. Governor Rao administered the oath of office and secrecy to Mr Palanisami and 30 of his Cabinet colleagues in a simple ceremony at Raj Bhavan at 4.30 pm. PM Narendra Modi spoke to Mr Palanisami and congratulated him. 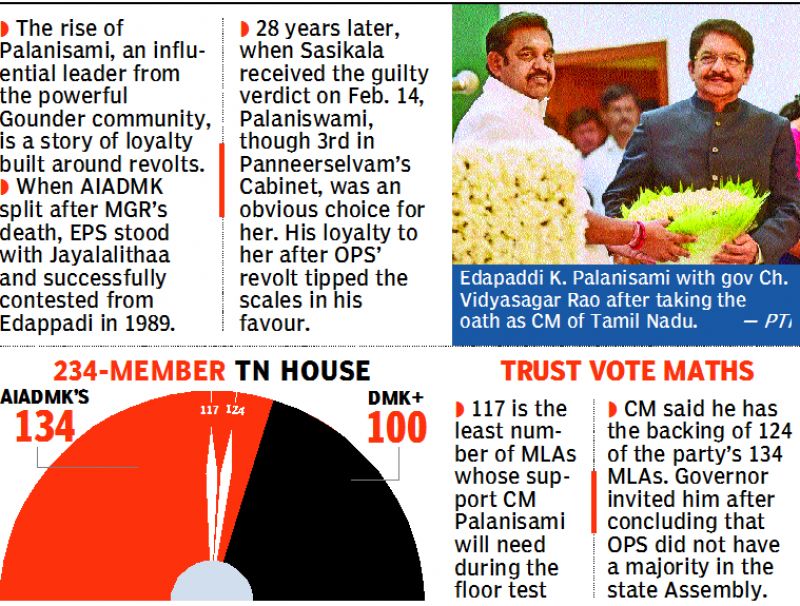 The governor heard competing pitches from both camps and decided to invite Mr. Palanisami to form the government after he concluded that Mr Panneerselvam did not command a majority in the House.

The succession war began in Tamil Nadu after then CM J. Jayalalithaa died in December 2016. Mr Panneerselvam was sworn in as the CM, only to resign a few weeks later, makimg way for Ms Sasikala to be the CM. But he then dramatically revolted against her, saying he had been forced to quit.

Mr Panneerselvam said on Thursday that he was anguished that power was now with those responsible for Jayalalithaa’s death, and vowed that his “battle will continue.”

The Supreme Court sentenced Ms Sasikala to four years in prison in a 21-year-old disproportionate assets case, also involving her mentor Jayalalithaa, putting an end to her bid for chief minister. Ms Sasikala will continue to be the party chief.

At the swearing-in ceremony, T.T.V. Dinakaran, the new deputy general secretary of the AIADMK and Ms Sasikala’s nephew, was seated in the front row. He accompanied the CM and his Cabinet members to the memorial of Jayalalithaa and that of her mentor, M.G. Ramachandran.