The floor test in the Assembly will be the first such exercise the state will witness in about 30 years. 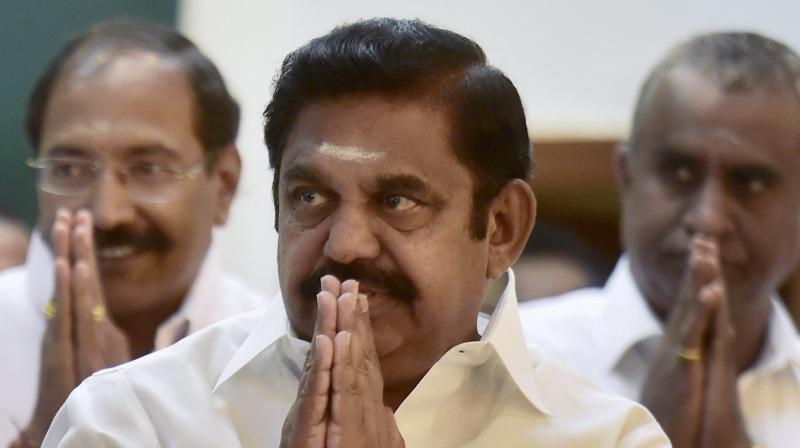 Chennai: Tamil Nadu Chief Minister Edappadi K Palanisamy, a loyalist of V K Sasikala, will seek a trust vote in the Assembly tomorrow and barring any last-minute hitches the new AIADMK government is expected to sail through.

On the eve of the vote, the Palanisamy camp on Friday got a jolt when one of its MLAs R Natraj, a former state DGP, said he would vote against the chief minister's motion of confidence. Natraj's move has reduced Palanisamy's stated support to 123 members in a House of 234.

The floor test in the Assembly will be the first such exercise the state will witness in about 30 years. "I am constrained to vote against the motion of confidence to be moved by the Edappadi K Palanisamy government," Nataraj said.

"I have interacted with people in my constituency and their considered and overwhelming opinion is that the government of O Panneerselvam should continue and I have to reflect this opinion of the people in the Assembly," Natraj, a Mylapore MLA, said.

To a question, Nataraj said he does not consider this as a confidence vote, but a 'conscience vote.'

Before Natraj announced his decision, Palanisamy has claimed the support of 124 MLAs and asserted his government will stay while his rival and predecessor O Panneerselvam has vowed to continue his fight against Sasikala and her family "till the time Amma (Jayalalithaa) regime is restored."

Though Panneerselvam now has the backing of 11 MLAs, experts feel he can jolt the government if he is able to wean away a few legislators from the Palanisamy camp and render it a minority government. AIADMK has 134 MLAs in the 234-member legislative assembly.

Palanisamy will be seeking the confidence vote in line with Governor Ch Vidyasagar Rao asking him to do so yesterday while inviting him to form the government.

Though the new government was given 15 days time to prove the majority in the House, Palanisamy, a known loyalist of AIADMK general secretary V K Sasikala, opted to do it within two days.

In fact, many MLAs supporting Sasikala are still staying at the resort in Koovathur, about 80 km from Chennai, and are scheduled to leave in the morning tomorrow to be on time for the trust vote at 11 am.

A revolt by Panneerselvam against Sasikala last week resulted in a political stalemate with AIADMK supporters divided between the two camps.

In an intra-party power struggle, Panneerselvam had rebelled against Sasikala on February 7, alleging he was forced to step down to make way for her becoming Chief Minister.  She had been elected the AIADMK Legislature Party leader on February 5.

But the Governor had apparently chosen to await the outcome of the Supreme Court verdict in the disproportionate assets case, in which Sasikala has been convicted and is serving prison term in Bengaluru.

Incidentally, it was a succession row that triggered a faction war in AIADMK that had prompted a floor test in the Tamil Nadu Assembly in January 1988, when Janaki, widow of M G Ramachandran, succeeded him in the midst of a bitter rivalry involving Jayalalithaa.

Amid chaotic scenes and a spate of disqualifications by then Speaker P H Pandian and boycott by the opposition, Janaki had managed to win the confidence vote.

But her government was a short-lived one as it was dismissed two days after the floor test by the Centre.