Delhi police commissioner S.N. Shrivastava denied any lapse in the probe against the activist 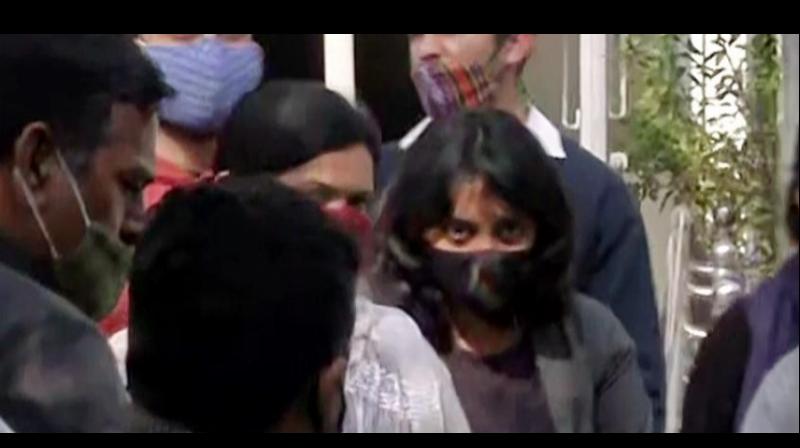 Chief metropolitan magistrate Pankaj Sharma allowed Ms Ravi to speak to her family members over the phone for 15 minutes a day. — ANI

New Delhi: The Delhi police on Tuesday sought details from video conferencing platform Zoom on the participants of the January 11 meeting by a pro-Khalistan group regarding the “toolkit” case, while probe agencies were also looking into the funding aspect.

The Delhi Commission for Women sent a notice to the city police on the arrest of climate activist Disha Ravi in the case and sought a report by Friday on issues like why she was allegedly not provided a lawyer of her choice when produced before a court. Meanwhile, a Delhi court has directed the police to hand over to Ms Ravi a copy of the FIR and other documents related to her arrest for allegedly being involved in sharing a “toolkit” on the social media on the farmers’ protest and allowed her to speak to her family.

However, Delhi police commissioner S.N. Shrivastava denied any lapse in the probe against the activist.

“As far as Disha’s arrest is concerned, it was done as per the procedures,” he said, while speaking to reporters. “The law does not differentiate between a 22-year-old and a 50-year-old. She was produced before a court which sent her to five-day police custody. It is false when people say that there were lapses in the arrest.”
Sources said the police is also likely to approach WhatsApp seeking details of the “International Farmers’ Strike” group created in December last year, they said.
According to the police, Ms Ravi, along with Mumbai lawyer Nikita Jacob and Pune engineer Shantanu Muluk, created the “toolkit” related to the farmers’ agitation and shared it with others to “tarnish” India’s image.

The police on Monday claimed 22-year-old Disha, who was arrested on Saturday from Bengaluru, sent the “toolkit” to teen climate activist Greta Thunberg through the Telegram app and also “coaxed her to act on it”.

The police alleged that Nikita Jacob and Shantanu Muluk were among the 70-odd people who attended the meeting organised by pro-Khalistan group Poetic Justice Foundation through the Zoom app, days before the Republic Day violence in the national capital that left more than 500 police personnel injured and one protester dead.
Police sources claimed Shantanu Muluk was in Delhi between January 20 and 27, but did not elaborate.

“The Delhi police has written to video conferencing app Zoom seeking details of participants who attended the meeting on January 11,” the official said. “We are also trying to probe the funding module in the toolkit case,” a source said.
Officials said the police had so far not received a reply from Google on the document being investigated.

The commission has asked police to provide the information by Friday, the DCW added.

The court on Tuesday also directed the police to provide Disha Ravi the copies of the arrest memo and remand papers, which was placed to seek her custodial interrogation. The court also permitted her to get warm clothes, masks and books.

Chief metropolitan magistrate Pankaj Sharma allowed Ms Ravi to speak to her family members over the phone for 15 minutes a day and meet her lawyer for 30 minutes a day while she is in police custody. The court passed the order on an application filed by Ms Ravi through her lawyer.

Earlier, the court had on Sunday sent Ms Ravi to five-day police custody after it said her custodial interrogation was required to probe an alleged larger conspiracy against the Government of India and to ascertain her alleged role relating to the “Khalistan” movement.

Earlier this month, the cyber cell had lodged an FIR against “pro-Khalistan” creators of the “toolkit” for waging a “social, cultural and economic war against the Government of India”. The case was registered under various sections of the Indian Penal Code, including criminal conspiracy and sedition.

The police said it was probing the role of a man named Peter Friedrich in connection with the “toolkit” case. The police said Mr Friedrich was on the radar of the Indian security establishment since late 2006 when he was seen in the company of Bhajan Singh Bhinder alias Iqbal Chaudhary. “He (Bhinder) has been a very leading proponent of the K2 desk of ISI. Friedrich was associated with him,” the police said.

“Why his (Peter’s) name is there on the document or why should he (Friedrich) be followed will be answered by Disha and her associates. Did they contact Friedrich through Mo Dhaliwal or directly contacted him is a matter of investigation,” a senior police officer said.