War of words in Rajya Sabha over child trafficking issue

BJP leader Rupa Ganguly stood up and claimed that personal allegations were being levelled against her. 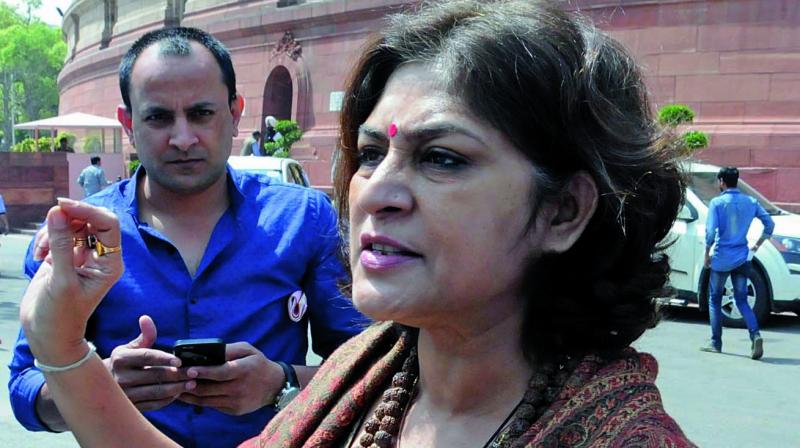 New Delhi: The Rajya Sabha Thursday saw heated exchanges between the treasury benches and Congress members over alleged involvement of a BJP leader in the Jalpaiguri child trafficking case.

In her Zero Hour mention, Congress’s Rajani Patil raised the issue of child trafficking at Jalpaiguri in which BJP West Bengal women’s wing leader has been arrested.

Deputy chairman P.J. Kurien asked her not to take any name. Ms Patil said 40 per cent of human trafficking cases in India are reported from Assam and West Bengal. A few minutes later, nominated member and BJP leader Rupa Ganguly stood up and claimed that personal allegations were being levelled against her.

This led to heated arguments between members of the ruling party and the Congress. Amid the heated exchanges, Mr Kurien said that if the name of an MP has been taken “directly or indirectly” by which people can understand who it is meant for, it will be expunged.

The West Bengal CID had unearthed the child trafficking racket during raids at homes and nursing homes in Baduria area of North 24 Parganas district, and Behala in the southern fringes of Kolkata and some other parts of south Bengal in November last year.

Earlier also, the House saw heated exchanges between the Opposition and treasury benches when Union minister M. Venkaiah Naidu tried to intervene during a Zero Hour mention on minimum support price by the government.

It was the first issue raised by JD(U) leader Sharad Yadav who wanted to highlight plight of farmers due to inefficient system of procurement of wheat and pulses by government.

His issue was supported by members of other Opposition parties, who demanded a response from the government. As Leader of opposition Ghulam Nabi Azad stood up and demanded a discussion on the issue, Mr Naidu intervened, saying it was “unfair” that the government is being criticised and making a “running commentary”.

Mr Azad objected to this, saying why should the minister “unnecessarily intervene” in the Zero Hour which as per rules is members’ time to raise issues pertaining to public interest.