When Gadkari worked all night to snatch Goa from Congress

I told him (Amit Shah) that we don’t have the numbers, but he would not take ‘no’ for an answer and asked me to try, says Gadkari. 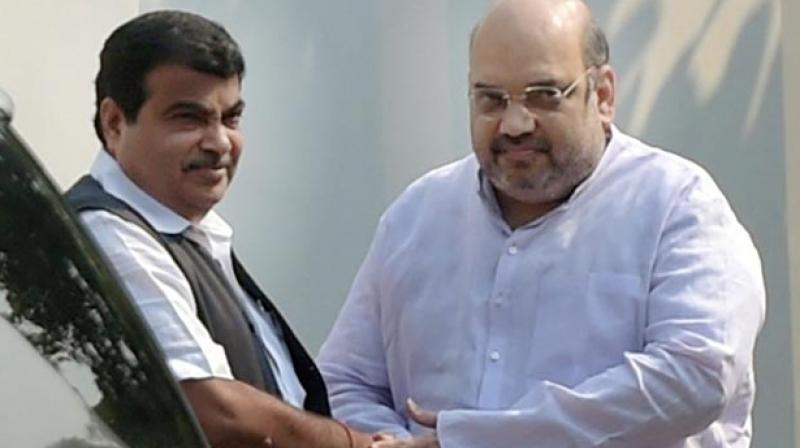 Mumbai: It was a call from BJP chief Amit Shah to Union Minister Nitin Gadkari on March 11 evening which set off a flurry of activities that culminated in the party mobilising support of a motley group of MLAs who had contested against it and won.

Amid the jubilation following the party's resounding victories in UP and Uttarakhand, the wily BJP boss wanted to have a shot at government formation in Goa where it had not even emerged as the single largest party, winning just 13 seats against Congress' 17.

The call led to Gadkari making a late evening dash for the tiny coastal state and a string of confabulations that went through the night into the early morning before a deal could be sealed.

"When results came in, the party chief (Amit Shah) called me up and asked me to meet him. I offered to come at his place rather than he visiting and we decided to meet at his residence in 30-45 minutes.”

"It was 7 PM. We discussed the political situation of Goa in detail. Our strength was only 13. I told him that we do not have the support which we were expecting," Gadkari told reporters here.

However, Shah would not take 'no' for an answer and insisted that Gadkari give it a try. "He told me that we have to form the government and asked me to go to Goa immediately," Gadkari, in-charge of BJP's Goa unit, said.

Soon, Gadkari was on a flight to Panaji. However, despondency awaited him there too. "A delegation of leaders in Goa told me that it is not appropriate for (Manohar) Parrikar to come back to Goa after quitting the Defence Ministry. I spoke to Parrikar as well," Gadkari said.

What followed was a sleepless night for Gadkari, a former BJP president himself, as prospective alliance partners expressed their willingness to extend support but with the rider that Parrikar be made the Chief Minister.

"At 1.30 AM, MGP's Sudin Dhawlikar met me. I know him for a long time, and we had a discussion. He pledged support to us. Vijai Sardesai of Goa Forward Party came to meet (me) next.”

"At 5 AM, they (MGP and GFP) put a condition that they will support BJP only if Parrikar is made the Chief Minister," Gadkari said.

Since Parrikar's return to Goa was a decision which required Prime Minister Narendra Modi's sanction, Shah was woken up at 5:15 in the morning of March 12. "I woke up Amit Shah at 5:15 AM and conveyed this to him. I told him that I am not able to decide and asked for his advice. He said the Prime Minister is sleeping right now. He said he will call the PM at 7 AM.”

"He (Shah) said if Parrikar were to be sent to Goa, the (BJP) Parliamentary Board will have to decide and his (Parrikar's) wish would also have to be considered," he said.

Much to Gadkari's relief, Shah called back at 8:30 AM, saying he had spoken to the Prime Minister and others and "everybody said that if we can form the government in Goa, and if Parrikar is ready, we should do so."

Getting Parrikar ready for a return to the state politics was much easier as the party strongman had often said he did not have friends in Delhi and that he missed Goan food.

Armed with letters of support from MGP, GFP and some independents, Parrikar staked claim to form the government the same night, drawing accusations of use of money power from the Congress.

Today, the fourth-time Chief Minister, won an easy trust vote in the Assembly 22-16, bringing to the fore the unease in the Congress whose MLA Viswajit Rane walked out during the voting, and quit his assembly seat and the party.