The bench posted the matter for further hearing on Friday morning. 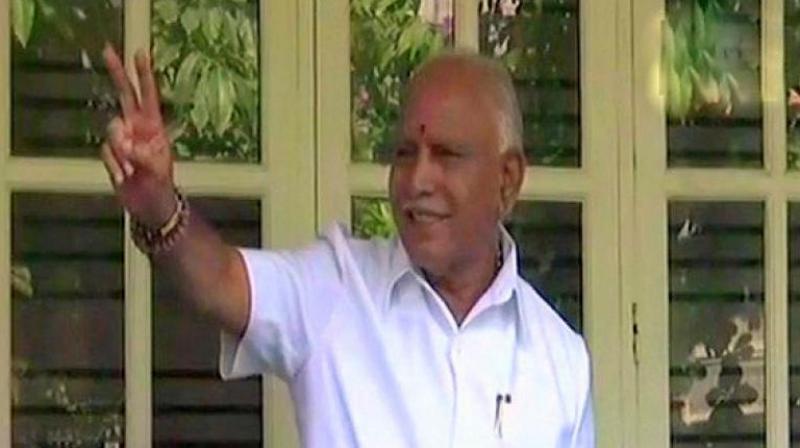 Hours before the swearing-in ceremony, the apex court made it clear that the swearing-in and the government formation would be subject to the final outcome of the case before it. (Photo: ANI | Twitter)

New Delhi: The Supreme Court today refused to stay BJP leader B S Yeddyurppa's swearing-in as Karnataka Chief Minister, paving the way for formation of his government after dramatic turn of events through the night inside and outside the courtroom that saw a rare post-midnight hearing continuing till the wee hours.

Hours before the swearing-in ceremony, the apex court made it clear that the swearing-in and the government formation would be subject to the final outcome of the case before it.

After hearing the matter for more than three hours beginning 2.11 am, a three-judge bench, comprising justices A K Sikri, S A Bobde and Ashok Bhushan, directed that the letter sent by the BJP to the governor for forming the government be placed before it.

The bench posted the matter for further hearing at 10.30 am on Friday morning, saying it would peruse the letter which is crucial to deciding the matter. It also issued notices to the Karnataka government and Yeddyurappa, who was sworn in as state chief minister on Thursday morning.

Karnataka Governor Vajubhai Vala had invited state BJP chief B S Yeddyurappa on Wednesday evening to form the government and prove his majority on the floor within 15 days. BJP has emerged the single-largest party in the Assembly elections with 104 seats but is 8 short of a simple majority of 112.

As soon as the results were clear, the Congress (78 seats) and the JD(S) with 38 seats came together to form a post-poll alliance and staked claim on the government with the adequate numbers.

After Governor Vala invited Yeddyurappa instead to form government, the Congress moved the Supreme Court on Wednesday night.