The Congress has pitted Mr Singh against BJP’s Pragya in Bhopal, which had gone to polls on May 12. 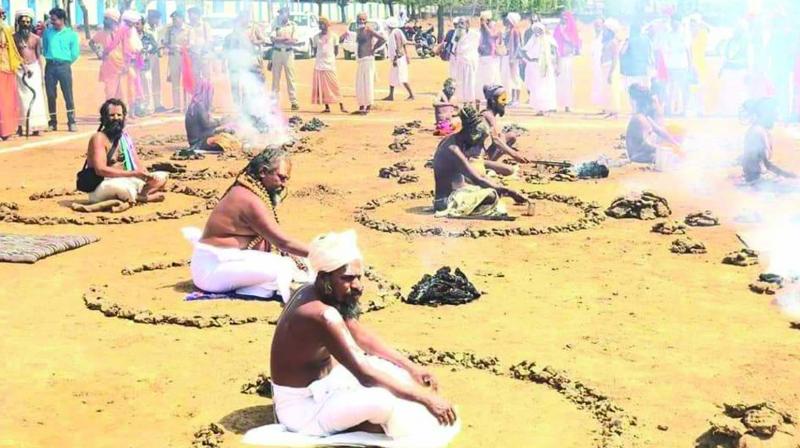 A file photo of a mass havan by seers to ‘demonstrate that Hindutva is no longer the monopoly of BJP’.

Bhopal: The “out of the box” campaign strategy adopted by the Congress to counter the saffron tide, caused by fielding of Sadhvi Pragya Singh Thakur, the rookie Hindutva face, by the BJP in Bhopal Lok Sabha constituency in the just-concluded polls, has been a subject of intense debate in political and intellectual circles in Madhya Pradesh.

The grand old party, uncharacteristically, had brazenly taken recourse to Hindutva route to ‘neutralise’ the impact of the religious appeal, Sadhvi Pragya was supposed to have cast on the electorate, particularly the rural women folk during electioneering in Bhopal, considered a BJP bastion, leaving elite mass of the capital city and even traditional Congress men bewildered.

“I have never seen Congress flaunting its ‘affinity’ to Hindutva so blatantly in public in my life. The public endorsement of complex rituals associated with Brahminical culture has dented secular credentials of veteran leader like Digvijay Singh,” a professor of sociology department in Barkhatullah University here told this newspaper unwilling to be quoted.

“Congress has turned into BJP and BJP into Congress in Bhopal elections,” a senior IPS officer of Madhya Pradesh cadre observed.

Hundreds of Hindu seers drawn from various parts of the country had literally laid siege to the historical city of Bhopal, treasure trove of ancient Persian art and architecture, by staging a massive roadshow led by Mr Singh in the run-up to May 12 polls in the constituency to rid him of his anti-Hindu image, ‘thrust’ on him for his unpleasant utterances in recent times.

The roadshow was preceded by a mass ‘havan’ by seers, performed in the presence of Mr Singh and his wife Amrita apparently to invoke divine blessings to ensure his victory.

The Congress has pitted Mr Singh against BJP’s Pragya in Bhopal, which had gone to polls on May 12.

“We had hosted the show of sahdus to demonstrate that Hindu seers and Hindutva are no longer the monopoly of BJP,” a senior Congress leader, loyal to Mr Singh, reasoned out.

“Mr Singh had been left with no other option than to counter BJP’s Hindutva and hyper-nationalism with a hard dose of Hindutva like this,” a Bhopal-based social activist S.Jain said.

A maverick politician that he is, 72-year-old Mr Singh had initially devised his campaign strategy based on a narrative of ‘secularism vs communalism’ to counter his BJP rival, not declared then, in Bhopal.

He had packaged the narrative with a plank of development of Bhopal to make it a winning formula.

However, he was caught unawares when the BJP fielded 2008 Malegaon terror blast accused Pragya, in whom the right wing party saw nationalism, Hindutva, and a woman victim of Congress ‘conspiracy’ to defame Hindu religion, all rolled into one its poll plank, to take on ‘mighty’ Mr Singh, known in political circles as the Chanakya.

Mr Singh had later revisited his strategy taking a plunge straight into Hindutva to counter the religious appeal of Pragya on rural voters.

Temple runs, visiting seers, sitting for hours at religious discourses by seers and staging rallies of sadhus by him had led to complete saffronisation of his campaigning.

If talks going round the Congress circles are to be believed, Mr Singh’s camp had even “won over” every priest of temples in Bhopal to influence the devotees thronging their shrines in his favour.

The “overdose” of Hindutva allegedly played by him seemed to have unnerved BJP.

“We are sceptical of Mr Singh’s form of Hindutva yielding any electoral dividends.

“He would never be able to shed his anti-Hindu image whatever he does,” a spokesman of BJP here said.

His view had interestingly found many takers in a section of Congress.

“We fear he has distanced himself from a section of Muslims, the support base of the Congress, by playing the Hindutva card which may hurt his poll prospects,” a senior Congress leader remarked unwilling to be quoted.

Besides adding saffron hues to his campaigning, Mr Singh had also taken recourse to traditional Congress campaigning method of reaching out to leaders of various communities belonging to all the religions for their support.

His mass contact programme wooing particularly Hindu communities such as Thakurs, Yadavs, scheduled caste and scheduled tribe people in Bhopal seat had led to the erosion of Hindu base of BJP in the seat, yielding electoral gains for him, Mr Singh’s close aides claimed.

The outcome of Bhopal elections on May 23 will alone establish the efficacy of his unconventional electoral strategy.