India   Politics  17 May 2019  'We will return with full majority,' says PM Modi in his first press conference
India, Politics

'We will return with full majority,' says PM Modi in his first press conference

BJP chief Amit Shah was also present at the media conference which the BJP officially addressed to end their campaign. 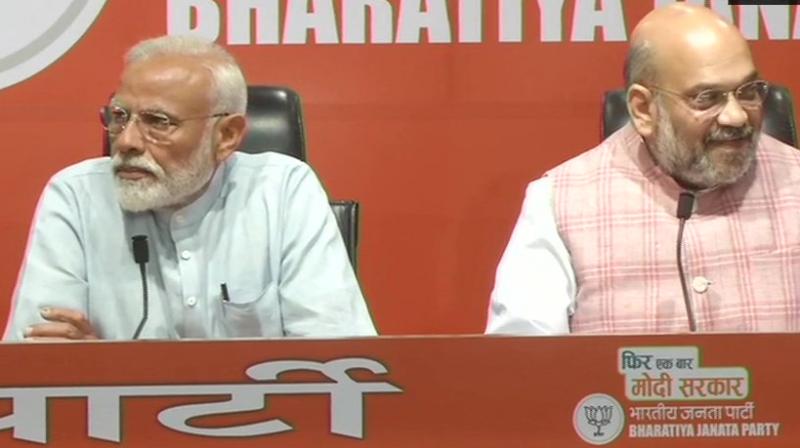 New Delhi: Prime Minister Narendra Modi, while addressing his first press conference on Thursday, said that his government would return back to power with full majority.

"This is happening after a long time that a government which won with full majority would come back with a full majority," Modi said.

PM Modi said his piece but didn't take any direct question from the reporters, directing them to his party president Amit Shah.

Lauding the people and country, Modi said that India had impressed all with its vibrant and diverse democracy that could sustain the world’s largest democratic exercise without a blink.

“The last time, in 2014, the Indian Premier League was sent abroad because it clashed with the elections. But during these elections, the elections continued through the IPL, Ramzan, Ram Navami, and even children’s exams,” the Prime Minister said at a press conference held to mark the end of the campaign.

Taking a dig at the Congress, Modi said that a casualty happened on this day five years ago. Referring to the results of 2014 elections which were announced on May 16, 2014, Modi said those who used to bet on the Congress in "Satta Bazaar" had lost after the results.

PM Modi said that these elections could be used as a good case study for the student of politics and psephologists.

Modi said that all the schemes of his government have been well thought out.

He said that during his election campaign none of his rallies were cancelled. He also said that the weather was very conducive during the campaign.

Shah recapped the last five-year rule of the NDA government, stating the people of India had accepted the 'Narendra Modi experiment'.

He said the Prime Minister's Office (PMO) monitored all 133 projects in the last five years, also touting the fact that the BJP had been able to form several state governments since 2014.

"The 50 crore poor are under consideration. We have worked for farmers, Dalits and women. We have given you a corruption free, inflation-controlled government. Modi hai toh mumkin hai," Shah said.

When asked about the candidature of Sadhvi Pragya, Shah said that she is contesting against the fictitious charges of earlier government to malign Hinduism by quoting the term "Hindu terror".

Referring to the controversial statements made by the BJP leaders Sadhvi Pragya, Anant Kumar Hegde and Nalin Kateel, Shah said, "They have have been issued a show-cause notice for their remarks on Nathuram Godse. They have to reply in 10 days. The disciplinary committee of the party shall take a call on this."

Earlier, the BJP had disassociated itself from their remarks.

Answering a question on the corruption charges levelled by the Congress president on the Rafale deal, Shah said that the deal was clean and corruption-free. Shah also said that if Rahul Gandhi had credible information about corruption in the deal, he should have informed the Supreme Court when the case was being heard.

Stating the corruption charges as baseless, Shah said that the apex court has given a clean chit and the Defence Minister has given a full statement in the Parliament.

Friday was the last day of the election campaign. The last phase of the seven-phased election will be held on May 19. The result shall be declared on May 23.