At his second rally at Dum Dum in the evening, the Prime Minister compared Trinamul supporters with the stone pelters of Jammu and Kashmir. 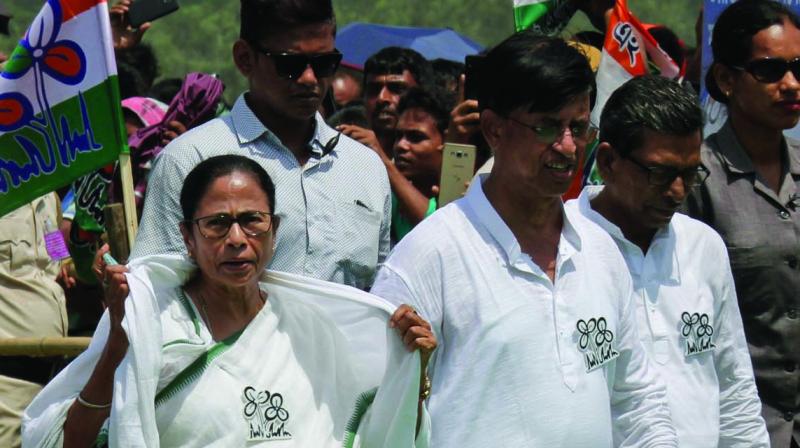 Kolkata: On the last day of campaigning in West Bengal before the final phase of voting in nine Lok Sabha seats on Sunday, Prime Minister Narendra Modi mounted his assault on chief minister Mamata Banerjee.

He vowed to rebuild the vandalised statue of polymath Ishwar Chandra Vidyasagar and accused  the state police and the government of attempting to shield the TMC-backed statue attackers and likened Trinamul workers to stone-pelters of Jammu and Kashmir.

Looking to counter Ms Banerjee’s allegation that BJP hooligans took to violence and desecrated Vidyasagar’s statue on Tuesday, Mr Modi claimed that the police, in connivance with the state government, is trying to wipe out evidence, including CCTV footage, of the incident that took place at Vidyasagar College during BJP president Amit Shah’s mega roadshow on May 14 in central Kolkata.

Mr Modi demanded strong action against the attackers for their “sin” of smashing the statue of Bengal Renaissance’s pioneer, while giving a clean chit to his party workers.

Desperate to mollify the Bengali community over his “silence” on the vandalism, Mr Modi also eulogised the 19th century reformer before underscoring that protection of Bengali culture is the “BJP’s top priority”.

The Prime Minister lambasted the West Bengal chief minister and her nephew Abhishek Banerjee, a Trinamul MP, for treating the state as their “jagir” (property).

“The people of Bengal are going to teach the meaning of democracy to Didi. The country has come to know very well the way Didi has been treating West Bengal as ‘jagir’ for her and her nephew and unleashing atrocities. You are witnessing what has been happening here for the past three four days during the campaign. Democracy has been defamed because of the massive violence unleashed by the Trinamul goons,” he said.

Addressing the day’s first poll rally at Mathurapur in South 24 Parganas, Mr Modi alleged, “Trinamul goons triggered massive violence here in such a way that great docial reformer Ishwar Chandra Vidyasagar’s statue, which was lying locked in a room, was vandalised at night. CCTVs have been installed in that college. The state government is busy destroying evidence in this case too like it did in Narada and Saradha scams. What is the reason behind it?”

Challenging Ms Banerjee on her turf, Mr Modi said, “It clearly shows to what extent Didi can go to for the sake of her vote bank politics.”

“Ishwar Chandra Vidyasagarji was a great son not only of Bengal but of the entire country. Those who caused damage to his statue have committed a sin. Strong actions have to be taken against the offenders. Severest punishment has to be awarded to them. This is my demand. From Swami Vivekananda to Shyama Prasad Mookerjee, Bengal’s culture had an immense contribution to shape the BJP’s ideology,” he said.

Dismissing Ms Banerjee’s allegation of violence and destruction of heritage by the BJP, Mr Modi added, “Protection of Bengal’s pride is the BJP’s priority. Today Vidyasagarji, irrespective of wherever he is, must have been seeing which party is fighting to protect the pride of Bengal and which one is working for the protection of the infiltrators. It is the BJP which has raised its voice against the atrocities in Bengal.”

Mr Modi also pointed to Ms Banerjee’s threat to send him to jail and noted he  she had recently threatened to capture BJP’s party office.

At his second rally at Dum Dum in the evening, the Prime Minister compared Trinamul supporters with the stone pelters of Jammu and Kashmir.

“Trinamul activists are calling for the assault and withdrawal of the Central paramilitary forces during the election. The stone pelters of J&K follow this path,” he argued.

Mr Modi reasoned that the election in J&K, despite being under threat from Pakistan-backed insurgents, were conducted peacefully but there can not be any phase or seat in West Bengal where violence marred polls.

Bringing down the curtains on BJP’s high voltage campaigning in the state, he pointed to statements by Opposition leaders, including those from the Congress,  giving up their claim for prime ministership, saying that it is a reflection that they had already accepted defeat.

The echo of the bitter war between the BJP and the TMC over the statue’s vandalism in Kolkata was felt even in faraway Mau in Uttar Pradesh where Mr Modi, during a rally earlier in the day, declared his government’s commitment to the “vision” of Vidyasagar and promised his grand statue will be installed at the very place where it was vandalised. The suggestion was promptly rejected by Ms Banerjee who said Bengal does not need alms from the BJP.

He said a grand “panch dhatu” (made up of five metals) statue of  Vidyasagar will be installed at the same spot to give a befitting reply to TMC workers.

The Prime Minister said he is going to Bengal later in the day and added that “anarchy was spread by TMC workers during his earlier meetings there in West Midnapore and Thakurnagar”.

“I have a rally in Dum Dum. Let’s see if Didi allows it, if she has her way she will not allow the helicopter to land,” Mr Modi said.

Lashing out at the SP-BSP alliance, he said those raising “Modi-hatao” slogans are today frustrated. “Uttar Pradesh has made their arithmetic all wrong and so their abuses have increased,” he said.“Mahamilawatis (the adulterated) want somehow to get ‘khichdi’ government at the Centre which can be blackmailed for their needs,” he said.