Sick of political apathy, Dalits to vote NOTA in Punjab

Organisation uniting Dalit laborers in Punjab has been able to convince Dalits of more than 60 villages to vote for NOTA. 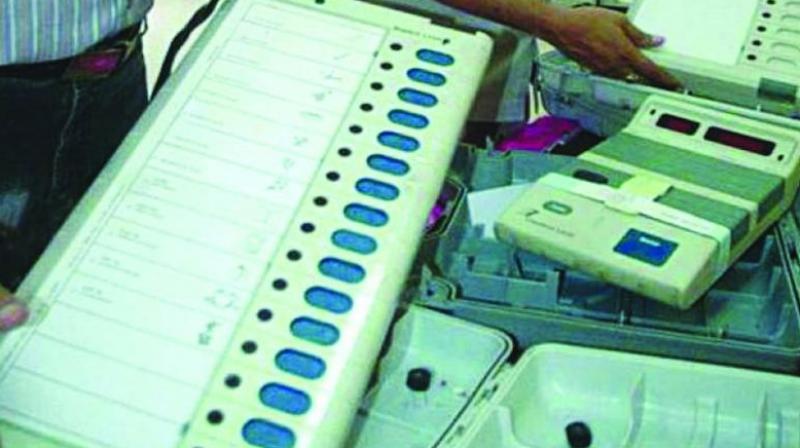 The Dalits of Tolewal village, which has 328 Dalits, would vote for NOTA to register their protest. (Photo: Representational image)

Chandigarh: Dalit voters in Punjab have taken their protest against the political parties as they have decided to vote for “NOTA” and not to any political front.

As reported by Firstpost, Dalit labourers and leaders held a meeting in Sangrur district’s Tolewal village where they discussed the injustices done to them by the higher caste Jat Sikhs and authorities as they have repeatedly trampled upon Dalit’s rights.

The meeting was addressed by Bhupinder Kaur, a landless Dalit labourer, who referred to the failure of the successive governments to ensure implementation of the Punjab Village Common Lands (Regulation) Rules, 1964, which requires that one-third of the land in every village panchayat be allotted to Dalit labourers for a year through annual bids.

The Dalits of Tolewal village, which has 328 Dalits, would vote for NOTA to register their protest.

And this is not the only village. Zameen Prapti Sangharsh Committee (ZPSC), an organisation uniting Dalit laborers in the Malwa region of Punjab has been able to bring Dalits of more than 60 villagers on the table to vote for NOTA.

In most of the villages in Punjab, there are two Gurudwaras—one for Dalits and the other for the rest of the castes.

Dalits are economically weak and non-implementation of the law makes them poorer.

Also, section 6(1)(a) of the Punjab Village Common Lands (Regulation) Rules, 1964 provides that one-third of the cultivable land proposed to be leased for a year shall be reserved for the Scheduled Castes.

However, Jat Sikhs, who are the traditional farmers in the state, take the land through their proxies.

The law says that the Panchayat is supposed to allot the land for Dalits. But, Beant Singh, the sarpanch of Tolewal, is helpless. Being a Dalit, he doesn’t have the support of most members of the Panchayat.

The region of Malwa, under which this village falls, comprises 11 of the state’s 22 districts and this decision of Dalits to go for NOTA may have a significant impact on the results. Dalits comprise 32 per cent of the state’s population and their maximum concentration is in Malwa region.

Also, Jats hold most of the land in the state with Dalits holding mere 6.02 per cent of the total operational holdings.

Gurumukh Singh, General Secretary of ZPSC told Firstpost, “Dalits in Punjab have been suffering for centuries even though their numbers are high. Jat Sikhs don’t want to loosen their grip on agricultural lands despite legislations in favour of Dalits. We have to fight this mentality; after all, Sikhism was founded on equality and justice.”

He said the decision to reject all the political parties was taken after a lot of deliberation.

Amreek Singh, a ZPSC member from Mansa district, said the government never made Dalits aware of their land rights. “Only recently have Dalit organisations come together to make the community aware about their rights. That’s why we have lost faith in governments," he added.

Even Dalit women have taken their protest to the streets. They are not shying away from campaigning against political parties. They have been going from village to village, urging Dalit voters to press NOTA during the polls.

Gurpreet Kaur, another Dalit from Balian village which has a substantial Dalit population, says that agricultural land was accumulated with the high castes for centuries.

"Almost all Dalits have agreed in our area that they will press NOTA and will not vote for any party. These political parties have only given us promises and taken our votes, now we will not vote for them," she added.

All 13 seats of the state shall go for polls in the last phase on May 19.