Will bring better scheme than Cong's 'Nyay' if voted to power: Mayawati

The BSP leader claimed that BJP would be ousted from power in the Lok Sabha elections. 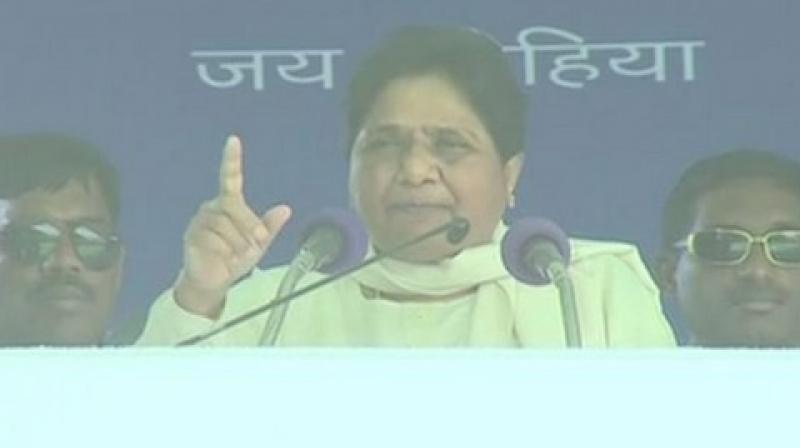 The former Uttar Pradesh chief minister appealed to the people to vote for the SP-BSP-RLD alliance so that it can form the government at the Centre. (Photo: ANI)

Mirzapur: BSP chief Mayawati on Friday downplayed the Congress' 'Nyay' scheme and promised to introduce a better one to eradicate poverty from the country if 'Mahagathbandhan' comes to power at the Centre.

"Like the BJP, the Congress is also making big promises. Its promise to give Rs 6,000 per month to the poor will not help in eradicating poverty. If we get a chance to form government at the Centre, we will make provisions to permanently employ poor people in government and private sectors," Mayawati said at an election rally here.

The former Uttar Pradesh chief minister appealed to the people to vote for the SP-BSP-RLD alliance so that it can form the government at the Centre.

Attacking the ruling BJP for what she called 'communal, castiest, and RSS-influenced policies," she said the Congress is responsible for the saffron party's rise and its "dictatorial and egoistic rule" rule in most of the states and at the Centre.

She said: "Actually the Congress is responsible for the BJP's dictatorial and egoistic rule in most of the states and at the Centre today. Had the Congress party worked with honesty and dedication for the people, we would not have seen the BJP in power in major parts of the country."

Mayawati defended SP chief Akhilesh, son of her long-time arch rival Mulayam Singh, over his comment on the BJP which she alleged was twisted by Prime Minister Modi at a rally here.

She said: "Yesterday PM Narendra Modi, at a rally here, indicated to Akhilesh Yadav saying that BJP starts and ends its discourse on the toilet. Akhilesh said the BJP constructed toilets but they do not have even basic amenities like water and door."

"I urge the BJP workers to go and tell the Prime Minister that we cared about daughters more than anyone would have cared," she said.

"I have got developed many villages under Dr Ambedkar Gram Vikas Yojana during my four terms as the chief minister of the state. We constructed toilets with door and water, schools, concrete roads in these villages. My government constructed much more toilets that the BJP has done so far," she said.

Stepping up her attack on the BJP, she said: "Since they know they are going to lose power, they are misleading people. Bad days will start from May 23 for Narendra Modi and his followers. And the preparation will also start to send Yogi to his 'Muth' (in Gorakhpur."

The voting for 13 Lok Sabha seats including Mirzapur and Robertsganj seats will go to polls in the last phase of General Elections on May 23. The counting of votes will take place on May 23.