A bystander said she had come with her relative who had breathing problems early this morning and no doctors had attended her till 10 am. 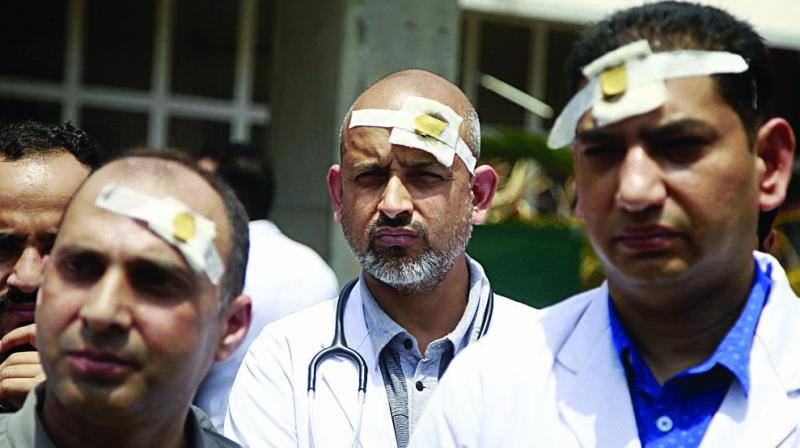 This was supporting the 24-hour nationwide strike being observed in support of the protests in West Bengal. (Photo: PTI)

Thiruvananthapuram: Healthcare services across Kerala were affected as doctors of state-run hospitals boycotted work for two hours on Monday and those of the private hospitals supporting the 24-hour nationwide strike being observed in support of the protests in West Bengal.

Long queues near Outpatient Departments (OPDs) were seen in several government hospitals across the state in the early hours of the day. Some patients said they didn't know of the strike and have been waiting for hours. "We left our homes at 3 am and do not know if the doctors will attend on us," a patient at the government hospital here said.

A bystander said she had come with her relative who had breathing problems early this morning and no doctors had attended her till 10 am. The Kerala Government Medical College Teachers Association (KGMCTA) participated in the boycott for an hour from 10 am.

Indian Medical Association's Kerala unit Secretary, Dr Sulphi Noohu, said only emergency services and casualty wing will function at private hospitals during the strike. Doctors will also not undertake private practise during the strike, he added.

Members of the IMA, which has called the strike, also staged a sit-in in front of the Raj Bhavan here, demanding security and protection for doctors. Doctors and medical students participated in the sit-in and raised demands like central legislation to protect doctors who were being attacked in hospitals, among others.

Junior doctors in West Bengal are on strike since June 11 after two of their colleagues were attacked and seriously injured allegedly by relatives of a patient who died at the NRS Medical College and Hospital in Kolkata. In a show of solidarity, medical practitioners across the country have chose not to work, leaving patients in the lurch.