PM Modi invites Opposition to discuss ‘one nation, one election’

Congress’ Adhir Ranjan Choudhary and K. Suresh were also present at the meeting. 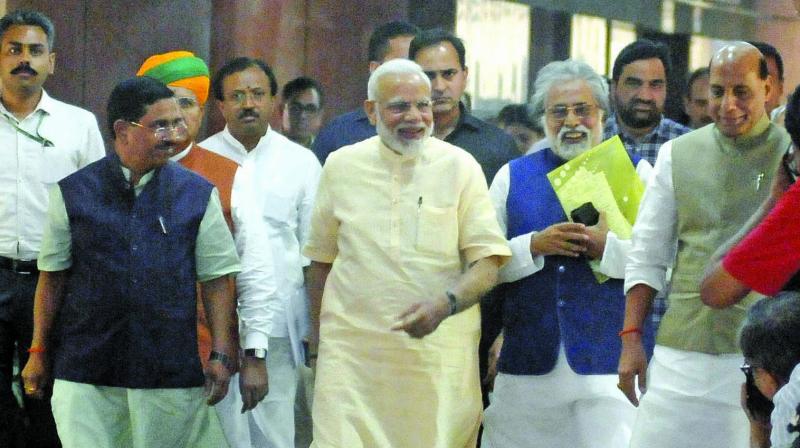 New Delhi: Chairing an all-party meeting on the eve of the first session of the new Lok Sabha, Prime Minister Narendra Modi on Sunday invited heads of all parties to a meeting on June 19 to discuss the “one nation, one election” issue and other important matters.

Addressing his first all-party meeting after coming back to power, Mr Modi told the MPs that the first session of the new Lok Sabha should begin with “fresh zeal and new thinking”.

As the Prime Minister sought to drum up support for the key bills ahead of the Parliament session, Opposition parties sought discussions on issues like farmers’ distress, drought, unemployment, women’s reservation bill and press freedom.

“We had a fruitful all-party meeting today, the first one after the election results and before the start of the Monsoon Session. Thankful to the leaders for their valuable suggestions. We all agreed on the smooth running of Parliament so that we can fulfil people’s aspirations,” the Prime Minister tweeted after the meeting.

Parliamentary affairs minister Prahlad Joshi told the media after the meeting that Mr Modi asked leaders of all parties to “introspect whether members of Parliament are able to fulfil people’s aspirations as their representatives and the manner in which last two years of the 16th Lok Sabha were wasted”.

In order to build “esprit de corps”, Mr Modi has invited chiefs of all parties who have an MP either in Lok Sabha or Rajya Sabha for a meeting on June 19. The meeting has been called to discuss “one nation, one election” issue, celebrations of 75 years of India’s Independence in 2022 and 150 years of Mahatma Gandhi’s birth anniversary this year, Mr Joshi said.

The meet on June 19 would be followed by a dinner meeting with all MPs of both the Houses on June 20 where they can freely interact and exchange views with the government, he added.

Meanwhile, the Opposition which collectively faced a near rout in the recent general elections, demanded a discussion in Parliament on issues such as farmers distress, unemployment and drought.

Leader of Opposition in the Rajya Sabha and senior Congress leader Ghulam Nabi Azad said that his party was not opposed to all bills which are in the interest of the people, adding that there should be a discussion on farmers distress, unemployment and drought.

He also called for early conduct of Assembly elections in Jammu and Kashmir, currently under President’s rule, asserting that if Lok Sabha polls can be held then why not state polls.

Congress’ Adhir Ranjan Choudhary and K. Suresh were also present at the meeting.

Trinamul Congress, which is the second largest Opposition block in Parliament, demanded that electoral reforms, including state funding of elections and paper ballots, should be discussed as also federalism and the issue of blatant use of ordinances.

TMC leader in Rajya Sabha Derek O’Brien demanded that the Women’s Reservation Bill, which seeks to reserve one-third of all seats for women in Lok Sabha and state Assemblies, be brought immediately in the session.