MGNREGA should not continue forever: Tomar

MGNREGA provides livelihood security by guaranteeing 100 days of wage-employment to a rural household in a financial year. 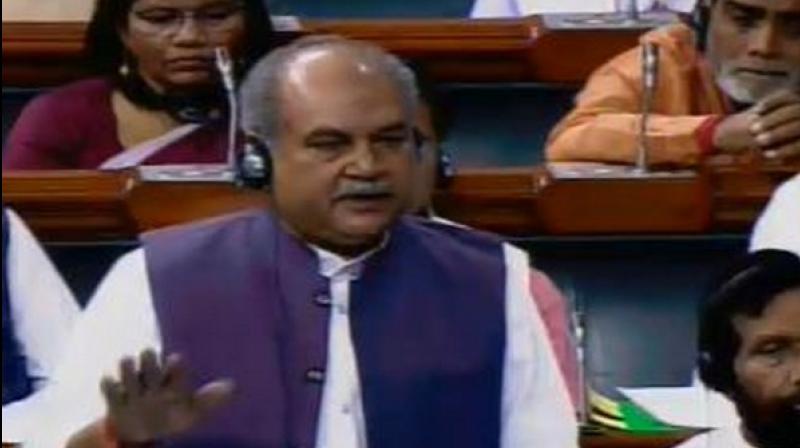 'MGNREGA should not continue forever, I am not in its favour. Our aim should be building poverty-free India,' Tomar said. (Photo: ANI)

New Delhi: Rural Development Minister Narendra Singh Tomar on Wednesday said that MGNREGA should not continue forever as it was a scheme aimed at the poor and the target should be removing poverty from the country.

Replying to debate in the Lok Sabha on the demands for grants for ministries of rural development, agriculture, and farmers welfare, he said the Narendra Modi government will meet its target of `housing for all' by 2022 and 1.95 crore more houses will be constructed in rural areas.

"MGNREGA should not continue forever, I am not in its favour. Our aim should be building poverty-free India," he said.

Tomar said efforts should be made for continuous improvement in standards of living of the very poor and poor by providing electricity, gas, house and roads, adding that the government's schemes were aimed at achieving this.

Tomar said 1.53 crore houses had been constructed under Pradhan Mantri Awas Yojana (Gramin) and 1.95 crore houses will be built by 2021-22.

Referring to the government's efforts to boost the income of farmers, the minister said that the government will launch a new Gramin Bhandaran Yojana so that they have the facility to store their produce locally.

Samajwadi Party leader Mulayam Singh Yadav said that farmers work the hardest but were the "most poor" and the truth should before the House.
He said family members of a farmer also help him in agriculture but the average income was very less.

Tomar said the government was making multi-pronged efforts to improve the lives of farmers and had taken steps to improve irrigation, provide them subsidy and pension and had increased minimum support price of crops.

He also stressed on diversification in agriculture and said the government will purchase power from farmers who use their barren land to install solar panels.
"The government is committed to making empowering farmers and bringing them prosperity," he said.