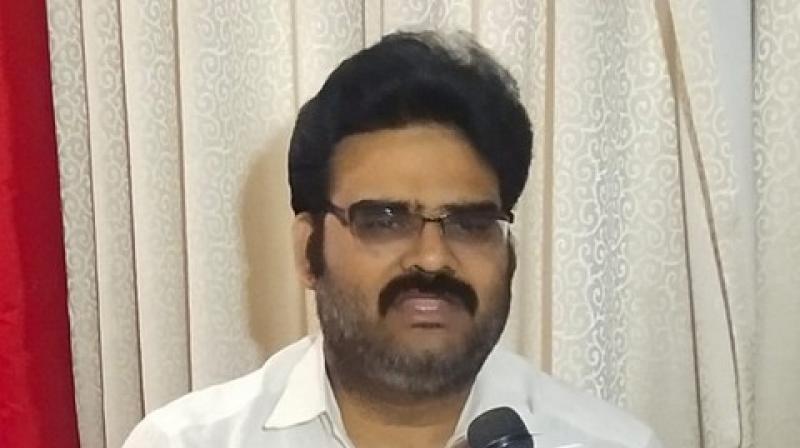 BJP leader Lanka Dinakar on Saturday demanded that the Central government should come forward to execute the Polavaram project as it has attracted various controversies since its inception. (Photo: ANI)

Hyderabad: BJP leader Lanka Dinakar on Saturday demanded that the Central government should come forward to execute the Polavaram project as it has attracted various controversies since its inception.

The BJP leader said that reverse tendering in the implementation of the Polavaram project may lead to overburden on the exchequer of union and state government.

"The applicability of reverse tendering in the Polavaram project shall be subject to the approvals of the Union Government agencies including the Polavaram Project Authority, Ministry of Jalashakti and Central Water Commission, but not at the wishes of Jagan and KCR together for the benefitting the certain corporate companies," he said.

"The cost of Polavaram project might be increased that could be a burden on the exchequer of the union and state government. Project implementation might be increased which will create problems for farmers for irrigation, people for drinking water and adversely affect industries which would create employment," he added.

"After meetings of Jagan Mohan Reddy and KCR, several issues come up. That means that there is a political intervention which is creating huge complication in the project. There was a demand raised by the then Water Resources Minister Nitin Gadkari about interlinking of Mahanadi - Godavari- Krishna - Penna- Kaveri. But the state governments have not given any approvals to this proposal," he said.

"They are proposing another project in which Godavari water will reverse from Polavaram project to Srisailam via Telangana through lift. It will create a burden on the exchequer of Andhra Pradesh and Telangana. When there is a river-linking demand of Gadkari then why such proposals are coming up now. Just for the sake of some individual benefits, these types of proposals are getting out by Jagan and KCR," the BJP leader said.