Bihar: Villagers hold up woman’s cremation for failing to pay dowry 4 years ago

At the time of their wedding, Parbati failed to give two cows, one goat and three sarees in dowry as per local tradition. 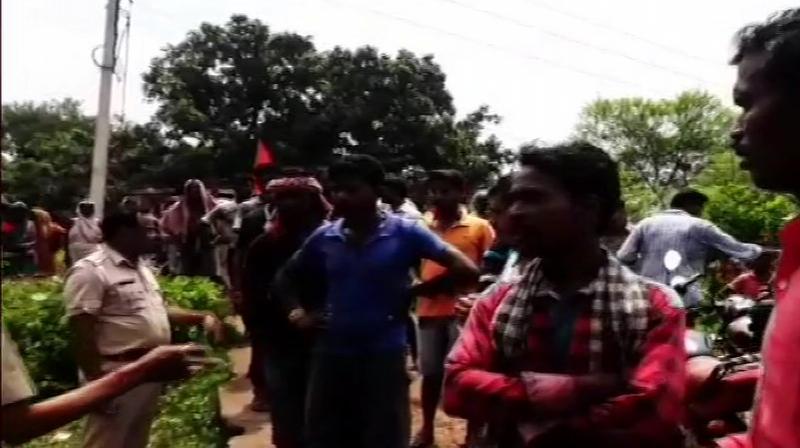 She was finally cremated after the intervention of Police. (Photo: ANI)

Bhubaneshwar: In a case of both caste-based discrimination and dowry, a man was abstained from cremating his 23-year-old wife for two days by villagers of Kuchei panchayat which is a tribal-dominated Mayurbhanj district.

The man was forced to delay cremation as villagers were opposed to his inter-caste love marriage and her family refused to give dowry as per the local tradition.

Kendra Soren’s wife Parbati died due to jaundice on Wednesday night.
His family, however, was not allowed to cremate her as they did inter-caste marriage four years back.

Also, at the time of their wedding, Parbati failed to give two cows, one goat and three sarees in dowry as per local tradition.

A Kangaroo court was set up by villagers and said that couple would be accepted only if the duo fulfills the demand of their community.

A few days back, Parbati, who was suffering from jaundice, was admitted to PRM MCH at Baripada. Kendra, however, brought her back as he was unable to afford the treatment and medicine costs and she succumbed to jaundice.

The villagers refused to extend any help to the family for her cremation. “As per the tradition of the Santal community, Kendra was asked to fulfill the demand of the Kangaroo court before taking his wife to the cremation ground,” said Ruhia Murmu, a neighbour.

She was finally cremated after the intervention of police.

“If the district police would not have intervened, I had decided to carry my wife’s body and cremate it in the village graveyard,” said Kendra who has two kids told the New Indian Express.

The Additional SP said an unnatural death case has been registered and further investigation is on.