However, Rane was expelled by Bal Thackeray after he voiced displeasure over Uddhav Thackeray gaining prominence in the party. 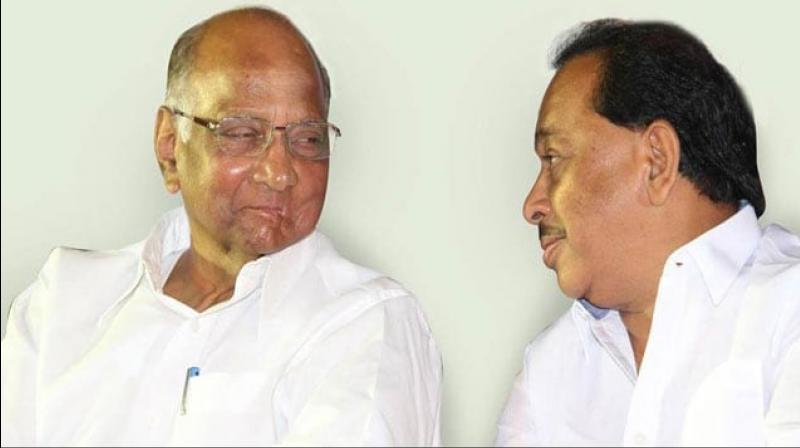 Nationalist Congress Party or NCP chief Sharad Pawar has said that he cannot tell whether former Shiv Sena leader Narayan Rane's move of joining the Congress in 2005 was a mistake or a blunder. (Photo: Twitter/ @Menarayanrane)

Mumbai: Nationalist Congress Party (NCP) chief Sharad Pawar has said that he cannot tell whether former Shiv Sena leader Narayan Rane's move of joining the Congress in 2005 was a mistake or a blunder.

He was speaking at the launch of Rane's autobiography in Mumbai on Friday.

Pawar said that Narayan Rane had two options -- either to join the Congress or the NCP. "He chose the Congress. I can't say whether it was a mistake or a blunder," Pawar said.

The NCP chief said that he had told Rane on the issue of being promised the post of chief minister by the Congress then that the grand old party does not function on the basis of assurances.

"Congress doesn't function like this. I know since I have spent a major part of my life there," Pawar said.

Narayan Rane, who has pockets of influence in the Konkan region of Maharashtra, was handpicked by Bal Thackeray as chief minister when he decided to remove the genial Manohar Joshi ahead of the 1999 Assembly elections.

However, Rane was expelled by Bal Thackeray after he voiced displeasure over Uddhav Thackeray gaining prominence in the party.

Union minister Nitin Gadkari, who was also present on the occasion, said in 1995, during the first Shiv Sena-BJP government, Narayan Rane was the Animal Husbandry Minister.

"When he would put forth his views in the cabinet meetings, we understood that this man was different. We came close when both of us became leaders of the opposition," he said.

Gadkari said he had advised Rane against joining the Congress.

"But Rane had tears in his eyes and said he had no other option. Had Rane not joined the Congress, the political scene in the state would have been different," he said.

Nitin Gadkari said late Bal Thackeray would tell him to induct some Shiv Sena leaders into the BJP and would also ask him to join the Shiv Sena.

"You are not right in the BJP, join the Shiv Sena," Gadkari recalled Bal Thackeray as saying.

Speaking on the occasion, Narayan Rane thanked Nitin Gadkari for taking time out to attend the function.

"BJP leaders and state ministers Vinod Tawde and Ashish Shelar came on one phone call. NCP leader Sunil Tatkare also came, but Chief Minister Devendra Fadnavis could not give his time," he said.

Rane said he feels bad that the most important phase of his life has gone waste.

"My time is going waste even now," Rane, who is an associate member of the BJP, said.

Rane quit the Congress in 2017 and formed Maharashtra Swabhiman Paksha and became an ally of the ruling BJP. He is currently the Rajya Sabha member on BJP ticket.