Pak wants J&K to be vulnerable, but precautionary measures are taken: Kishan Reddy

Earlier on Saturday, 2G mobile internet services were restored in Jammu, Reasi, Samba, Kathua and Udhampur districts of the region. 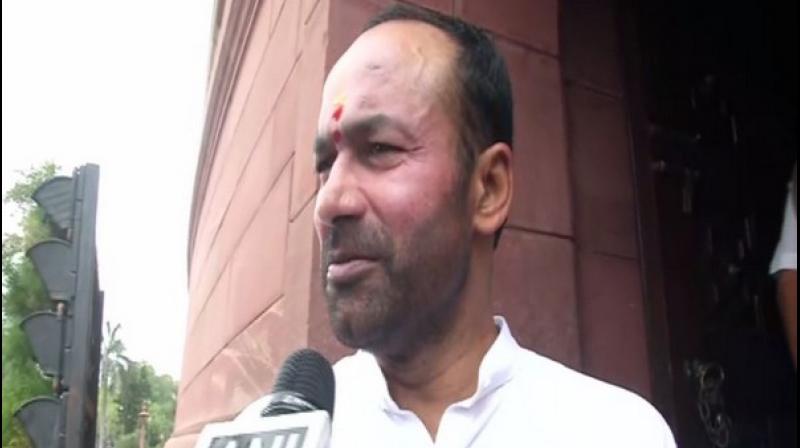 Pakistan wants Jammu and Kashmir to be vulnerable, but we are taking all precautionary measures, said Minister of State for Home Affairs G Kishan Reddy here on Saturday. (Photo: File)

Hyderabad: Pakistan wants Jammu and Kashmir to be vulnerable, but we are taking all precautionary measures, said Minister of State for Home Affairs G Kishan Reddy here on Saturday.

"The situation in Jammu and Kashmir is normal and it is improving day-by-day as we have taken all the precautionary measures in the region. We get provocative statements from Pakistan and they want the situation in the state to be vulnerable. We are taking all the precautionary measures and Jammu and Kashmir is under our surveillance," Reddy told ANI.

He added, "All the educational institutions will be opened on Monday and section 144 has been removed from Jammu and Kashmir except some districts. It will be normal within a week."

Commenting on the detention of several leaders in Jammu and Kashmir, Reddy said: "This is not the first time that they were detained. During Congress' regime also, leaders from Jammu & Kashmir National Conference and Jammu Kashmir Liberation Front (JKLF) were detained. It is for their own safety that we detained them as a precautionary measure."

Earlier on Saturday, 2G mobile internet services were restored in Jammu, Reasi, Samba, Kathua and Udhampur districts of the region.

Mobile internet services were suspended in Jammu on August 5, in view of security concerns in the region. The restrictions on the telecom services were continued in the wake of abrogation of Article 370.

Earlier on Friday, the government had decided to lift restrictions imposed in Jammu and Kashmir, in a phased and gradual manner.

Jammu and Kashmir Chief Secretary, BVR Subrahmanyam had said, "Telecom connectivity will gradually be erased and restored in a phase-wise manner keeping in mind constant threat posed by terrorist's organisations in using mobile connectivity to organise terror actions. Prevention detentions are being continuously reviewed and an appropriate decision would be made based on law and order situation."