Kumar, the JD(U) chief was sworn-in for the seventh time during the day 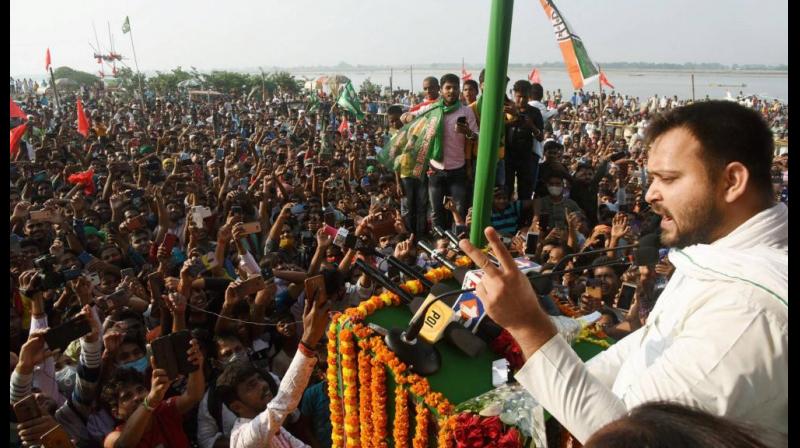 Patna: RJD leader Tejashwi Yadav, who has questioned the fairness of the counting process in the Bihar polls, on Monday extended his wishes to Nitish Kumar on being nominated the chief minister.

Kumar, the JD(U) chief was sworn-in for the seventh time during the day. He was administered the oath of office at the Raj Bhavan here by Governor Phagu Chauhan, a day after he staked claim armed with the unanimous support of all legislators of the NDA despite JD(U)'s poor showing.

Tejashwi and his RJD have been alleging that the counting process was compromised under pressure by Kumar. The charges have been refuted by the poll panel. With Kumar taking over as the chief minister on Monday, Tejashwi again questioned his election and suggested the JD(U) chief has been nominated rather than being elected as the chief minister.

Best wishes to Nitish Kumar ji on being nominated as the chief minister. I hope he makes his priority positive issues such as aspirations of the people of Bihar, the NDAs promise of 19 lakh jobs-employment, education, health, livelihood, irrigation and justice rather than his ambition for the chair, Tejashwi wrote in a social media post.

Kumar's JD(U) had clinched just 43 seats, 31 less that its ally the BJP. RJD had won 75 seats to emerge as the party to have won the largest number of seats of the 243 member assembly. RJD and four other Mahagathbandhan constituents, boycotted Nitish Kumars swearing-in ceremony alleging that the mandate in the Bihar polls was against the NDA an was changed through fraud. LJP president Chirag Paswan too took a dig at Kumar as he congratulated him on being administered the oath of office. Paswan's Lok Janshakti Party had walked out of the NDA in Bihar vowing to oust Nitish Kumar from power in the state, also congratulated BJP on "making" him the chief minister.

Congratulations to Nitish Kumar Ji on becoming chief minister again. I hope the government completes its term and you continue to remain the chief minister of NDA only, Paswan tweeted after Kumar was administered the oath of office.