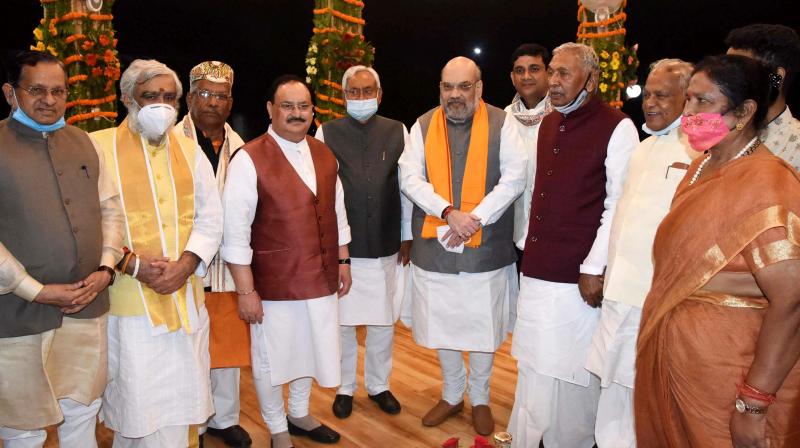 Besides, 12 others were also sworn in as ministers – five are from the JD(U) quota, and one each from Hindustani Awam Morcha and Vikasheel Insan Party. The BJP being the largest party in the NDA has seven ministers, including two Deputy Chief Ministers.

Union Home Minister Amit Shah and BJP President JP Nadda, along with other senior party leaders, were also present in the governor house during the oath ceremony.

NDA insiders said that the ministries have been allocated on the basis of two berths each for every seven seats won by the allies. However, sources said that both JD(U) and BJP may increase ministerial berths in the coming days after consulting NDA allies.

This is the first time in the history of Bihar that two deputy chief ministers were sworn-in on the lines of Uttar Pradesh Model. Political analysts feel that the BJP is trying to make inroads into the Vaishya and EBC communities by making Tarkeshwar Prasad and Renu Devi as Deputy Chief Ministers.

Tarkeshwar Prasad, who comes from the Seemanchal region, has won from Katihar seat for the fourth straight term. He has his roots in the RSS and is considered a strong Vaishya face. Similarly, Renu Devi, a fourth-time MLA from Bettiah belongs to Noniya caste, which comes under the EBC bracket and is considered a popular face in the West Champaran.

She was also a minister in the NDA government in 2010 headed by Nitish Kumar.

“People have trusted the NDA by electing us and now it’s our responsibility to work for the development of Bihar,” Renu Devi said after taking oath on Monday.

Amid all these developments, there are reports that senior BJP leader Sushil Kumar Modi is rattled over being sidelined by the party. Popularly known as SUMO in Bihar politics, he had been Nitish Kumar’s deputy between 2005-2013 and 2017-2020.

After the BJP’s debacle in 2015, when Nitish Kumar formed a grand alliance with RJD and Congress party, it was Modi who highlighted the illegal properties allegedly held by Lalu Yadav and his family.

In 2017, when Nitish Kumar broke his ties with the grand alliance and formed the government with BJP’s support. Modi was made the Deputy Chief Minister.

“He will be missed,” JD(U) leaders said after the oath on Monday. However, BJP leaders when asked about Sushil Kumar Modi’s role in the government said that “he is party’s asset and may get some important role. Our central leadership will take a final decision about his new role.”