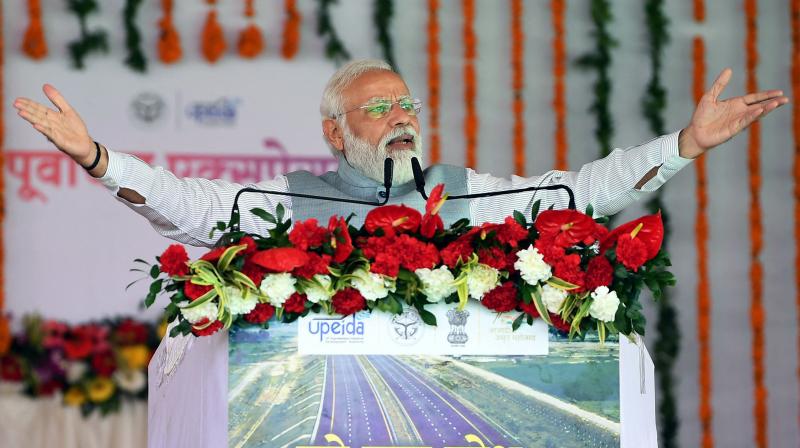 Prime Minister Narendra Modi speaking during the inauguration of the new Purvanchal Expressway during a touchdown operational exercise by the Indian Air Force, in Sultanpur district in Uttar Pradesh. (AP Photo)

The Prime Minister remarked that security of the country is equally important as the prosperity of the country. Keeping that in mind, emergency landing provision for fighter jets has been made while constructing the Purvanchal Expressway. He added that the “roar of these planes will be for those who ignored the defense infrastructure in the country for decades”.

“Keeping in mind the needs of this decade, infrastructure is being built to build a prosperous Uttar Pradesh… Today, demands of Purvanchal are given equal importance as the demands of the West… The ‘double engine government’ is fully committed for the development of Uttar Pradesh,” the PM said.

The Prime Minister remarked that the Eastern part of India and Northeastern states, despite having so much potential for development, did not get much benefit from the development taking place in the country. The PM said the way the earlier governments ran for a long time, they did not pay attention to the overall development of UP and lamented that in spite of such a large area blessed with “Ganga ji” and other rivers, there was no development till seven-eight years ago.

“For previous chief ministers, development was limited to where they had their homes. But today, the demands of Purvanchal are given equal importance as the demands of the West,” the Prime Minister said and added that the Expressway will connect those cities with immense aspiration and huge potential for development with Lucknow and where the good road leads, good highways reach, there the pace of development increases, job creation happens faster.

Uttar Pradesh will be going for Assembly elections next year.