Navjot Singh Sidhu reiterates that the country's fight is against terrorism and perpetrators of terror. 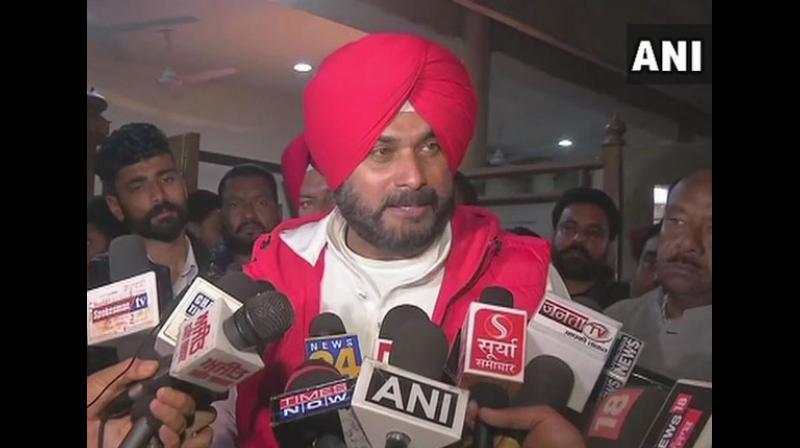 Punjab Minister Navjot Singh Sidhu had said that a nation cannot be held responsible for the acts of terrorists. (Photo: ANI)

Punjab: Congress leader Navjot Singh Sidhu who is facing flak for his recent comment on the Pulwama terror attack, said that he is firm on his stand and reiterated that the country's fight is against terrorism and perpetrators of terror.

"I am firm on my stand. Terrorism will not be tolerated. People who are responsible should be punished so harshly that it acts as deterrence for generations to come," Sidhu told reporters here.

Following the terror attack, the Punjab Minister had said that a nation cannot be held responsible for the acts of terrorists.

Speaking to reporters today, Sidhu raked up the 1999 Kandahar incident wherein an Air India flight was hijacked by members of Jaish-e-Mohammed (the perpetrators behind the Pulwama terror attack) and asserted that those responsible should be extradited.

"I want to ask who released those involved in the 1999 Kandahar incident? Whose responsibility is it? Our fight is against them. Why should a soldier die? Why can't there be a permanent solution? Terrorism has no community. The issue is not what I am saying - the issue is this (terrorism). Our fight is against those who claimed responsibility (for 1999 attack). It is my fight as well," he said.

#WATCH Navjot Singh Sidhu says,"I am firm on my stand. Terrorism shouldn't be tolerated. I want to ask who released those involved in 1999 Kandahar incident? Who's responsibility is it? Our fight is against them.Why should a soldier die? Why can't there be a permanent solution?" pic.twitter.com/7Oe73dVqP5

"Navjot Singh Sidhu should be suspended from the Congress party for his comments on Pakistan. In fact, a case should be registered against those who make anti-national statements," said SAD leader Parkash Singh Badal.

Another SAD leader, BS Majithia, claimed that the party was not allowed to pass a resolution against Sidhu in the House.

"Punjab CM passes a resolution condemning Pulwama attack. But a man (Sidhu) in the cabinet praises Pakistan. We wanted to move a resolution against it in the Assembly today, but we were not allowed. If we can't speak in the Assembly, where do we speak?" he asked.

A resolution was reportedly unanimously passed in the House on Monday, condemning the Pulwama attack.

Opposition members, however, protested against Sidhu in the state assembly today as a mark of protest against Sidhu. Moreover, at the commencement of the Question Hour in the Assembly, SAD-BJP MLAs raised slogans against Sidhu.

Nearly 40 CRPF personnel were killed in Awantipora in a terror attack orchestrated by Jaish-e-Mohammed (JeM), a Pakistan based terror outfit.

The convoy of 78 buses, in which around 2,500 CRPF personnel were travelling from Jammu to Srinagar, came under attack at around 3.15 pm at Ladhu Modi Lethpora on February 14.