The swearing-in ceremony of the new UP CM will be held tomorrow in presence of Prime Minister Narendra Modi. 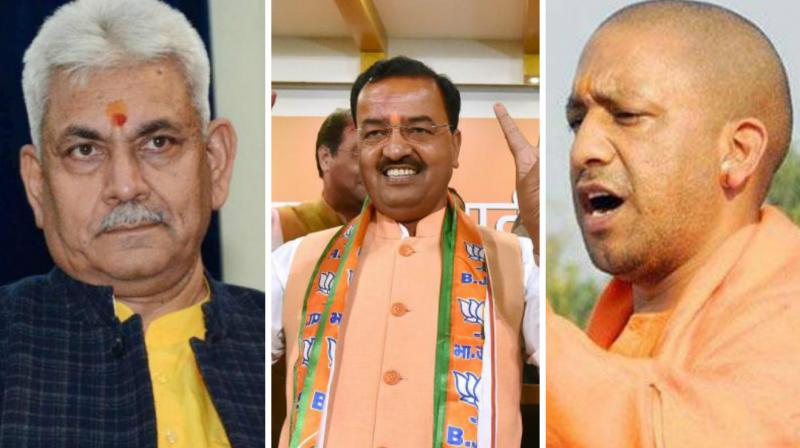 Lucknow: As the countdown for the final decision on the chief ministerial face of Uttar Pradesh is nearing its end, the tussle for the chair of power has escalated to levels of demonstrations in favour of the names of contenders - UP BJP chief Keshav Prasad Maurya and firebrand leader Yogi Adityanath.

Yogi Adityanath emerged as a serious contender for the CM's post, an NDTV report claimed that he is BJP's top pick for the position.

Earlier reports suggested that the BJP top brass may pick Union Telecom Minister and Ghazipur MP Manoj Sinha for the coveted post owing to his large experience in the party operations. However, reports claimed that RSS leaders rejected his candidature.

Sinha too had been staunchly denying any possibilities of his ascension as the Chief Minister.

"Neither I am in the race (for UP CM) nor do I know of any such race," Sinha told the media yesterday.

While a section of the party is confident that Sinha's name will be announced after the meeting of the newly-elected party MLAs, the BJP central leadership seems far from spelling its choices.

As several sections of the media quoted reports that said Sinha was almost finalised for the coveted chair, hundreds of Maurya's supporters took to the streets and staged a demonstration demanding that he be made the Chief Minister.

Maurya, however, remained unperturbed with the various reports doing rounds. He requested his followers to maintain discipline.

"The party leadership will decide the Chief Ministerial candidate and we will follow whatever it says," he said.

Another group demanded veteran leader Kalyan Singh to be given the coveted post making it a problem for the state leadership. "We know that he is the ruling Governor of a state, but we think he is the only one who can handle the state and its affairs," one of the protestors said.

Since the BJP picked Trivendra Singh Rawat as the Chief Minister of Uttarakhand, a similar choice of caste in Sinha may strengthen the party's stronghold in the north.

Maurya can be a huge investment too in view of his popularity among the Other Backward Classes (OBCs) and the BJP's constant efforts to win over the minority votes, especially the Dalits.

Adityanath's ascension can simply strengthen the BJP's 'Hindutva' establishment in the state, but may provide enough fodder to the opposition to attack the saffron party on lines of 'divisive politics'.

Meanwhile, the permutations and combinations to zero in on a credible face for the most important post in the politically crucial state are on as BJP president Amit Shah reached Lucknow and met Maurya.

Reports suggest the BJP central leadership is keen on picking the right person for the top post in Uttar Pradesh as it is crucial for Prime Minister Narendra Modi in his bid to win a second term at the Centre in 2019.

The BJP is set to hold its legislature meet this evening to elect the new Chief Minister with Shah been empowered to have the final say in the decision.

The swearing-in ceremony of the new Uttar Pradesh Chief Minister will be held tomorrow in presence of Prime Minister Narendra Modi.

The BJP marked an astounding victory in the Uttar Pradesh Assembly elections by winning 325 seats out of 403, thus dislodging the ruling Samajwadi Party (SP) from power.