PM Modi was also seen meditating inside a cave near the premises of the Kedarnath temple. 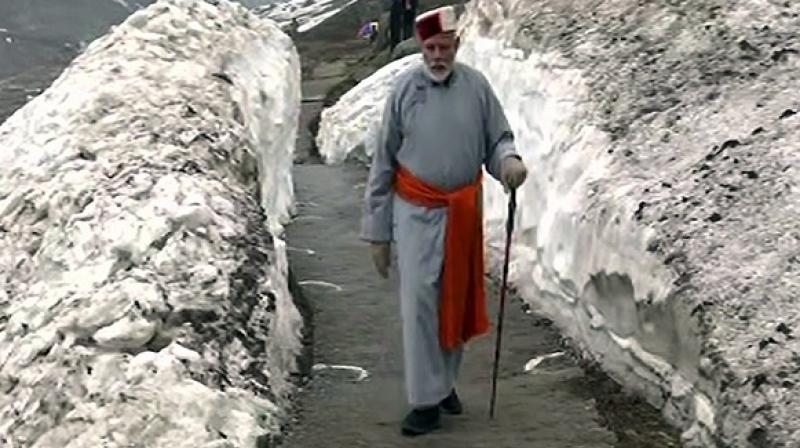 Modi circumambulated the temple and later interacted with local officials, even taking time out to monitor the progress of ongoing development works in the area. (Photo: ANI twitter)

Kedarnath: Prime Minister Narendra Modi's two day visit to Uttarakhand's Kedarnath and Badrinath began with a visit to the ancient Kedarnath temple and offered prayers at the innermost sanctum of the temple dedicated to Lord Shiva. Alongside he was apparently sending a message to voters in West Bengal and Himachal Pradesh on Sunday.

Modi circumambulated the temple and later interacted with local officials, even taking time out to monitor the progress of ongoing development works in the area.

A closer look at the PM's fashion choice for the visit also hinted at subtle messaging intended for those voting in West Bengal and Himachal Pradesh tomorrow in the last phase of voting.

When asked about PM's choice, sources travelling with the Prime Minister said that he was wearing a robe like garment similar to a 'Jobba' with a saffron belt around the waist. His headgear of choice was a 'Himachali topi' (cap indigenous to Himachal Pradesh).

The 'Jobba' was made trendy by Nobel prize winner and one of West Bengal's most famous sons Rabindranath Tagore while the saffron belt sported by Modi today was a homage to Kolkata-born Hindu philosopher Swami Vivekananda who was often seen wearing one.

The 'Himachali topi' completed PM's attire, which seemed to be an apparent signal to the voters of West Bengal and Himachal Pradesh, who will exercise their franchise tomorrow.

PM Modi was also seen meditating inside a cave near the premises of the Kedarnath temple. Sources said the PM would come out of the cave tomorrow morning, only to be disturbed in case of matters that would need his urgent attention.

The final phase of polling for 59 Lok Sabha seats will be held tomorrow, in which 13 seats of Punjab, 13 in Uttar Pradesh, nine in West Bengal, eight each in Bihar and Madhya Pradesh, four in Himachal Pradesh, three in Jharkhand and the lone seat of Chandigarh will be decided. Modi too is in the fray in this phase with Varanasi.