28-year-old Yadav was charged with corruption by the CBI. 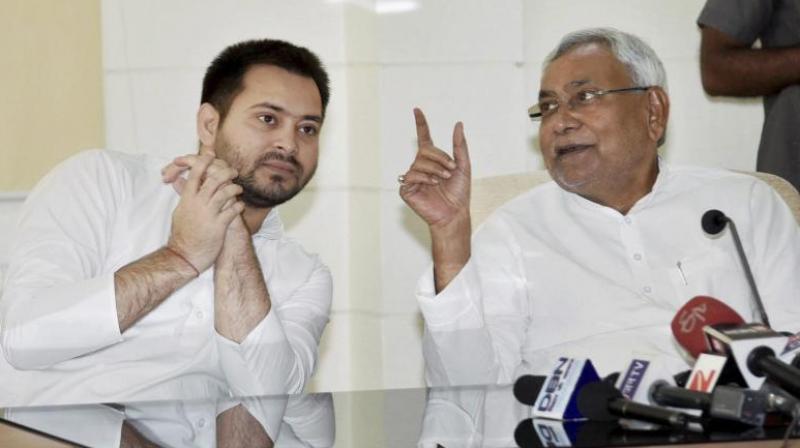 Tejaswi arrived for a cabinet meeting on Tuesday along with state health minister and his brother Tej Pratap Yadav. (Photo: File)

Patna: In the eye of a storm after lodging of an FIR by the CBI against him in the land-for-hotels case, Deputy Chief Minister Tejaswi Prasad Yadav on Tuesday attended a Cabinet meeting chaired by Chief Minister Nitish Kumar.

Amid the continuing stand off between JD(U) and RJD over the former's demand to explain the alleged acquisition of massive wealth, Deputy Chief Minister Tejaswi Yadav went to the CM's chamber after the Cabinet meeting.

His minister brother Tej Pratap Yadav and state Congress chief and minister Ashok Choudhary too were present in the CM's room.

It was not clear what transpired in the meeting, which appeared to show that the Grand Alliance of JD(U), RJD and Congress is intact.

Amid the mounting tension between JD(U) and RJD over the the former's demand from the deputy CM to clear his name in public with facts over the CBI allegation in the case and the later saying 'no' to Tejaswi's resignation, there was
speculation if he would attend the Cabinet meeting at all.

Tejaswi had on Saturday skipped a government function in which he had to share dais with the chief minister.

The deputy CM, however, arrived for the meeting along with Tej Pratap Yadav in the same car.

Earlier, many RJD ministers assembled at the residence of former Chief Minister Rabri Devi and moved together for the Cabinet meeting from there in a motorcade.

The mediapersons were barred entry into the secretariat, the venue of the Cabinet meeting, following a scuffle between Tejaswi and Tej Pratap Yadav's securitymen and mediapersons after the last Cabinet meet on Wednesday.

The press briefing by Cabinet Coordination Department Secretary Brajesh Mehrotra has also been shifted to the Public Relations Department office at some distance. It is used to be held at the secretariat itself.

Despite the show of unity, JD(U) spokesmen Neeraj Kumar, however, said the coalition dharma is bigger than showing obstinacy.

Another JD(U) spokesman Rajiv Ranjan Prasad repeated the party's demand that the accused come clean on accusations on the basis of facts.

The BJP and its NDA partners on Tuesday stepped up its demand for resignation of Tejaswi Yadav.

Senior party leader Sushil Kumar Modi alleged that the deputy chief minister has amassed 26 properties at 26 years of age without declaring his sources of income.

"Tejaswi should tell people about his sources of income and how he acquired all these properties," Modi told reporters.

Attacking Nitish Kumar for failing to take a call on Tejashwi Yadav, Hindustani Awam Morcha leader Jitan Ram Manjhi said, "He is indulging in 'nautanki' (drama) to hold on to the power anyhow."